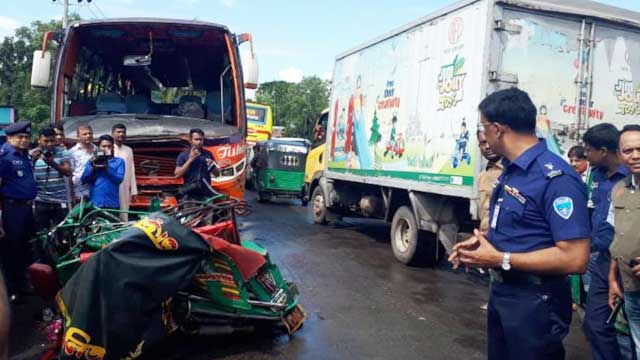 At least 224 people were killed and 866 injured in 203 road accidents across the country during these Eid-ul-Azha holidays, says a report published on Sunday.

The Passenger Welfare Association of Bangladesh published the report at a press conference at the Dhaka Reporters Unity in the capital.

The association compiled the death figures from reports published in 41 national and regional dailies and 11 online news portals during 12 days between August 6 and 17.

Reckless driving, especially after the Eid holidays, was mainly blamed for the fatal accidents while lack of adequate role by law-enforcers and other relevant authorities was also attributed to these accidents during the national holidays.

A similar June PWAB report showed that at least 273 people were killed and 849 injured in 232 road crashes during the Eid-ul-Fitr holidays.

According to the Sunday report, 52.21 per cent road mishaps took place as vehicles ran over pedestrians and 33 per cent involved motorcycles.

Day-wise, the highest 30 people were killed and the highest 221 injured in road accidents on August 15.

Among the road-accident victims during this Eid-ul-Azha, 42 were students, 37 drivers, 22 children, eight members of law-enforcing agencies, three journalists, three physicians and two were political leaders.

In this Eid, 11 people were killed under the wheels of trains, one died falling from train roof, one died as a train and a vehicle collided and one committed suicide under a train.

Mozammel observed that transport owners still did not pay workers their monthly salaries, which forced them to drive recklessly to earn more.

He also blamed absence of members of law enforcers and relevant authorities in sufficient number on roads for accidents.

According to the first information reports filed with the police in the first four months of this year, 427 people were killed and 658 injured in 848 accidents around the country.