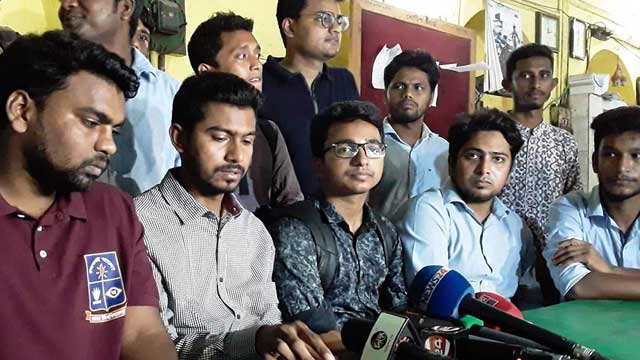 Claiming that he was attacked eight times by activists of Bangladesh Chhatra League (BCL) and the ruling party since June 30, Vice-president (VP) of Dhaka University Central Students’ Union (Ducsu) Nurul Haque Nur on Monday said his life is now at stake.

“Now, I’m suffering from a sense of insecurity as I’ve received threats from ruling party men and Detective Branch at different times,” he said while addressing a press briefing at Madhur Canteen on the DU campus at noon.

Nur convened the press briefing against the backdrop of the attack on him at Ulania Bazar in Galachipa upazila of Patuakhali on the day of Eid-ul-Azha on August14.

“The goons were not done with injuring me in the attack, they also did everything to deprive me of treatment and have since then threatened me not to make a fuss about the incident,” Nur said.

“You all know, since the time I was elected VP of Ducsu on June 30 last year, I have so far been attacked eight times by the goons of Bangladesh Chhatra League and activists of other ruling party front organisations,” he added.

Demanding that punishment be meted out to the attackers, the Ducsu VP expressed the hope that law enforcers will find out the culprits and take necessary actions in this regard.

Mentioning that criticism of the government’s wrongdoings is the democratic right of a citizen, he said, “I always raise my voice against the lawlessness and irregularities. No one can stop me from protesting these irregularities."