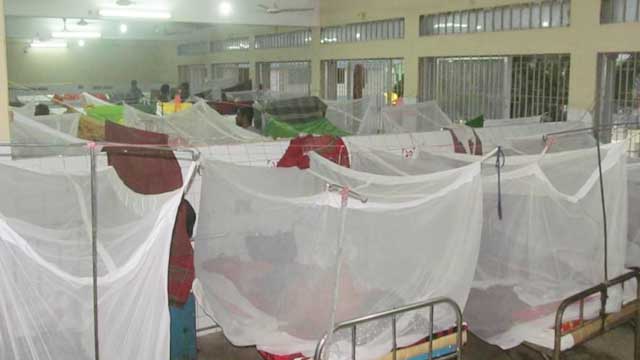 Five more people died of dengue and 1,615 others were hospitalised with the mosquito-borne viral fever on Monday as the situation continues to worsen every day.

With the five deaths, at least 115 people died so far with dengue, although the government statistics put the death toll at 40.

Directorate General of Health Services’ Health Emergency Operation Centre and Control Room said on Monday that at least 1,615 dengue patients were hospitalised in the last 24 hours ending at 8:00am on Monday with 757 in the capital and 858 in the districts.

While the dengue outbreak initially remained confined to areas in the capital city, as had been the case since the first reported occurrence of dengue in 2000, it started spreading outside Dhaka in the fourth week of July.

Dengue spread all over Bangladesh in a week while its severity in outlying areas outweighed that in Dhaka in the subsequent week.

The number of dengue patients hospitalised in the districts continue to be higher than that in the capital since July 8.

Between July 8 and 19, at least 12,410 dengue patients were hospitalised in the districts and 10,038 in the hospitals in the capital, according to the compiled data of the control room.

So far 54,797 dengue patients were hospitalised this year and 40 died, the control room said.

Among the hospitalised dengue patients, 36,336 were in the past 19 days of August alone and 16,253 in July as the rising number of dengue infections created an epidemic-like situation since July.

On Monday, at least 6,733  dengue patients were under treatment at different hospitals including 3,419 in the capital and 3,314 in the districts.

The Health Services said on Saturday that the ongoing week would be crucial for controlling dengue spread and destroying aedes mosquitoes, the vector of the viral fever.

The DGHS, in a news briefing at its office on Saturday, said people were returning to the capital after Eid holidays at a time when the weather was unfavorable to them.
DGHS director for disease control Sanya Tahmina said that the next seven days were crucial for reining in the dengue situation.

She added that the intermittent rain, the humidity and the heat were ideal for aedes breeding.
‘If we could not keep vigil and failed to destroy aedes breeding grounds and keep us safe from mosquito bites, the dengue situation might turn worse,’ she feared.

MMCH deputy director Lakshmi Narayan Majumder told New Age that Selim, 27, from Durgapur of Netrokona, who was admitted with dengue at the hospital a week ago, died early Monday.

Another dengue patient, Russell, died at the hospital around 1:30pm on Monday, he said.

With the two deaths, at least four people died of dengue at the hospital, Lakshmi said.

In Khulna, Mizanur Rahman, 42, of Khawajadanga in Rupsa upazila, who was admitted with dengue on August 15 at Khulna Medical College Hospital, died at 7:00am on Monday.

In Faridpur, Delowar Hossain, who was admitted with dengue around 12:00am at Faridpur Medical College Hospital on Monday, died around 10:00am later on the day, the hospital director Kamada Proshad Saha told New Age.

SM Bakir Hossain, director of the hospital confirmed the news and said Sumaia was admitted to the hospital on August 16.

On Sunday, she was transferred to the intensive care unit after her condition deteriorated.
She died around 2:00pm on Monday, the hospital director said.