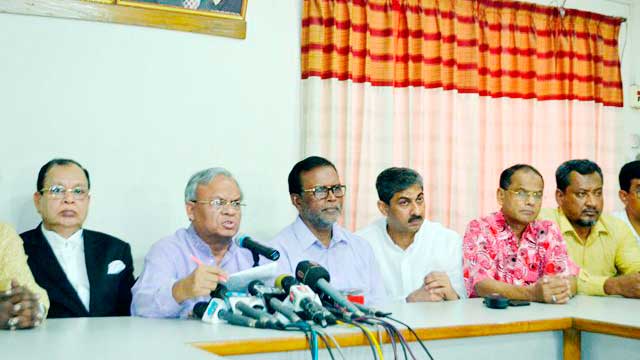 BNP senior leader Ruhul Kabir Rizvi on Wednesday said there is a question in public mind whether Awami League had ‘involvement’ with the blueprint of the August-21 grenade attack.

“Everybody knows the fact. It (August-21 attack) was part of a deep-rooted blueprint. People have doubt whether the ruling party (AL) had involvement with it. A question has arisen in public mind about it,” he said.

Rizvi, BNP senior joint secretary general, came up with the remarks while speaking at a press conference at BNP’s Nayapaltan central office.

Rizvi claimed that the investigation into the grenade attack case was not fair and impartial. “The neutral investigation was obstructed, and we repeatedly talked about it in the past.”

He said Tarique Rahman's name was not there in the chargesheet submitted during the 1/11 government on August 22, 2007 accusing 22 people.

The BNP leader alleged that Tarique’s name was included in the supplementary chargesheet of the case when Awami League came to power.

He questioned as to why the IO of the case did not get Tarique’s involvement in the grenade attack during the 1/11 regime.

“Tarique Rahman was implicated in the case with a political motive. Had there been the rule of law, justice and good governance, the real offenders would have been punished,” Rizvi observed.

Describing the August-21-grenade attack as a tragic incident, those who conspired against the then BNP government might have carried out it.

As his attention was drawn to the Information Minister’s comment that Khaleda Zia had involvement with the August-21 incident, he said they can say anything as they are now in power, but people know the fact.