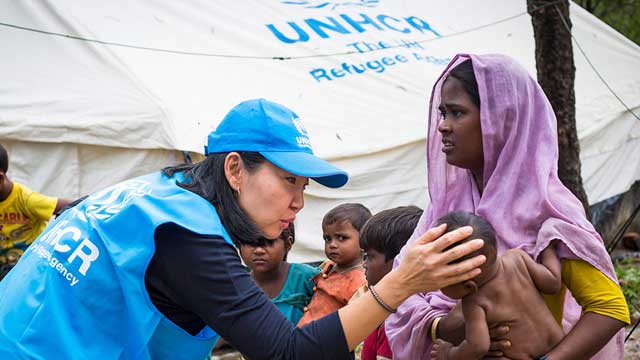 “The Myanmar government has betrayed us many a time in the past. We don’t trust them anymore” said Joynab Begum, one of the 3,450 Rohingyas set to be repatriated on Thursday, after learning that she is on the list.

Distrust of the Myanmar government runs deep among the Rohingyas, who have been forced to flee their homeland in Rakhine State over the years and live in cramped camps in Bangladesh.

Dhaka and Naypyidaw signed a deal in 2017 on the repatriation of Rohingyas but there has been very little progress. A 2018 repatriation attempt was halted after protests by the refugees.

The Human Rights Watch on Tuesday urged Myanmar and Bangladesh to suspend the latest plan “until the returns are safe, voluntary, and dignified”.

“Myanmar is yet to address the systematic persecution and violence against the Rohingya. So, refugees have every reason to fear for their safety if they return,” said Meenakshi Ganguly, HRW’s South Asia director.

Some of the Rohingyas included in the repatriation list reportedly demonstrated in front of camp-26 on Tuesday afternoon but the camp’s in-charge M Khalid Hossain insisted that there had been no protests.

Bangladesh is currently hosting 1.1 million Rohingyas, most of whom came crossed the border after Myanmar military launched a brutal attack targeting the minority Muslims on 25 August 2017.

The refugees and rights groups have accused the army and its local collaborators of killing, rape, torture, arson and loot –- charges Naypyidaw denies. The then top UN human rights official described Myanmar’s treatment of the Rohingyas as “textbook example of ethnic cleansing”.

State-sponsored discrimination against the Rohingyas stretches back decades and they are denied citizenship. The HRW says the remaining Rohingyas in Rakhine State are confined to camps and villages with no basic freedoms.

Refugees on the repatriation list have raised a few demands before they willingly return. Some of them told UNB that their demands include granting them citizenship, giving back their belongings and houses, releasing imprisoned Rohingyas, trials for killing and rape, and assurance of free movement and security.

The UNHCR interviewed Rohingyas on the final list at camps 24, 26 and 27 on Tuesday morning. Leaflets were also distributed in the camps on behalf of UNHCR and the government containing information about the repatriation.

M Zubair, a resident of block-A of Shalbon camp told UNB that an UNHCR team came looking for family data card. “I didn’t know anything about repatriation but later learned that my name was on the list,” he said.

When asked if he was willing to return, the Buchidong resident said: “I’ll go back only when citizenship is granted, and security as well as rights to free movement are ensured. My land and belongings must be returned. Otherwise, we’ll surely be killed. In that case, it’ll be better to die here.”

Hasina Begum, who is also on the list, echoed Zubair.

The HRW said conditions in Rakhine State are not conducive for voluntary, safe, or dignified repatriation of Rohingya and accused Myanmar of doing nothing to improve conditions or address the root causes of the crisis.