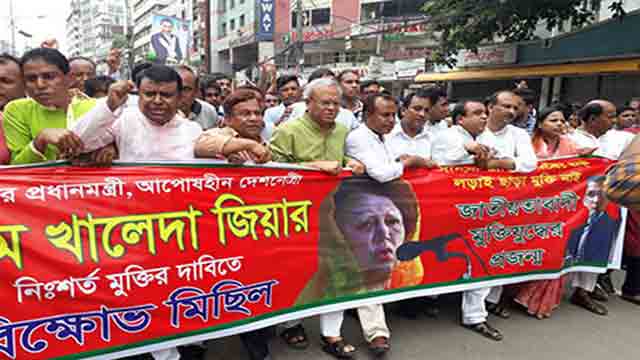 BNP on Friday alleged that the government has diplomatically failed to initiate the repartition of Rohingyas to their homeland in Myanmar.

“The government couldn’t do anything to start the repatriation of Rohingyas. It's been a long time since they (Rohingyas) came here, but you (govt) couldn't still send any of them,” said BNP senior joint secretary general Ruhul Kabir Rizvi.

He further said, “It’s an utter failure. You’ve failed diplomatically to send the Rohingyas back.”

Despite all the preparations, no Rohingya turned up on Thursday to avail of the “voluntary” repatriation offer given to them to go back to their place of origin in Rakhine State of Myanmar prompting the authorities to suspend the repatriation process for the day.

Earlier, the first batch of Rohingyas was scheduled to return on November 15 last year but it was also halted amid the unwillingness of Rohingyas to go back for lack of a congenial environment in Rakhine.

Foreign Minister Dr AK Abdul Momen on Thursday said Bangladesh does not want to do anything by force and laid emphasis on removing trust-deficit among Rohingyas who refused to return to their homeland.

Bangladesh is now hosting over 1.1 million Rohingyas and most of them entered the country since August 25, 2017. The two countries signed a repatriation deal on November 23, 2017, but there has been little progress.

Rizvi said the government has long been saying it has many foreign friends, but no one did anything for it to begin the Rohingya repatriation. “But Bangladesh has long been enduring huge pressure of such a big population of Rohingyas.”

He said the government has not only failed diplomatically, but also failed to deliver on all fronts. “You’re financially unsuccessful and you’re unable to maintain the law and order. As a result, blood is shed everywhere, people are getting killed and women and children are being repressed.”

The BNP leader said their BNP chairperson Khaleda Zia must be freed from jail to restore democracy and people’s rights.