Locals on demo against Rohingyas 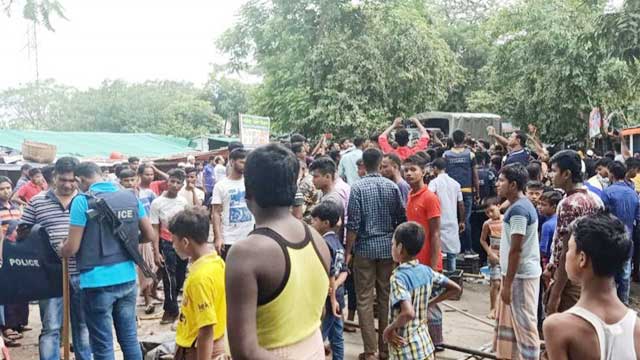 Local people took to the streets and attacked a Rohingya camp on Friday after a Juba League leader was shot dead allegedly by Rohingya thugs at Jadimura area under Teknaf upazila in Cox’s Bazar on Thursday night.

Victim Omar Faruk, a man in his thirties and son of Abdul Monaf of Jadimura area, was the president of Ward number 9 unit of Juba League and chief of the Jadimura MR Government Primary School management committee.

Faruk’s elder brother Osman Goni alleged that a group of Rohingyas picked up Faruk from a place near his house and took him away at about 10:30pm.

He said that he along with the locals rushed towards the direction the Rohingya’s took his brother away and found that his brother was shot dead at a nearby hill.

Pradip Kumar Das, officer-in-charge of Teknaf police station, said the victim’s family member and local people spotted the bullet-hit body of Faruk and informed police about it at about 11:00 pm.

He said that they recovered the body and sent it to Cox’s Bazar Sadar Hospital for post-mortem examination.

‘We have been investigating into the matter,’ he said, responding to a question whether Faruk was shot dead by Rohingyas and reasons behind the murder.

Protesting against the incident, the villagers of Jadimura and surrounding areas gathered on Jadimora point of Cox’s Bazar – Teknaf highway after Jumma prayers and began to stage demonstration by setting fires to tyres at about 1:30pm demanding immediate arrest of the killers and their exemplary punishment.

A group of the agitators also attacked the nearby Rohingya camps but a group of locals and police who rushed the spot on hearing the demonstration calmed the agitators, witnesses said.

The agitators withdrew their blockade at about 3:30pm on assurance from police, they said.

Teknaf police station OC said that the situation was under control and extra police forces were deployed in the area to avoid any untoward incident.