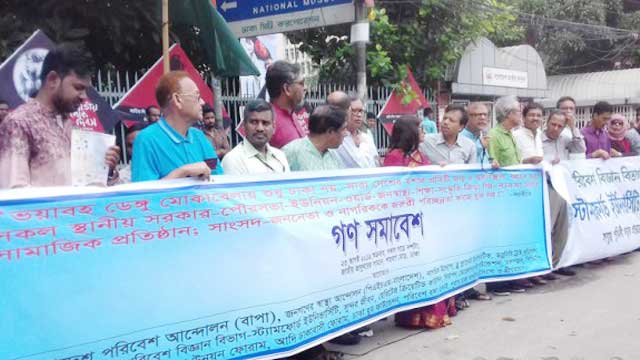 Terming the steps taken by the government to curb dengue outbreak in the country as “ineffective and show-off”, a pro-environment organisation today demanded for it to take effective measures against the mosquito-borne disease by integrating people from all sectors.

Bangladesh Paribesh Andolon (Bapa) came up with the demand at a rally programme in front of the National Museum at Dhaka’s Shahbagh around 10:30am.

“Government was late in starting measures against dengue, and even after that, they are yet to put in all-out effort in this regard,” said Dr Abdul Motin, general secretary of Bapa.

About the import of mosquito repellents, Motin said “It is a failed project of the government.”

“They have not revealed the test results on effectiveness of the repellents because those are ineffective,” the Bapa general secretary claimed, adding that usage of such repellants might further damage the environment.