185 killed in 135 accidents during Eid journey 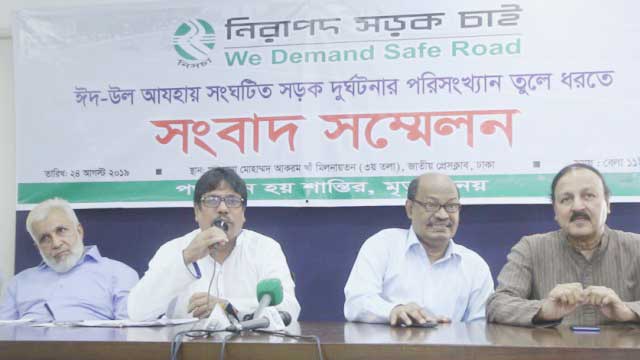 A total 185 people were killed in 135 accidents on road, railway and river routes as holidaymakers travelled home to spend their vacation with their near and dear ones during the Eid-ul-Azha this year.

Also, a total 355 people were injured in the accidents, according to a report of Nirapad Sarak Chai (We Demand Safe Roads), a road safety campaigning group.

Liton Ershad, acting secretary general of the group, presented the report at a press briefing held at the Jatiya Press Club this morning.

The report was prepared based on news reports of different newspapers, online news portals, television channels, and news agencies collected by activists of 120 branch organisations of the campaigning group across the country.

According to the report, the number of accidents, the death toll, and the number of injured were higher compared to the figures during the Eid-ul-Fitr this year, when a total 184 people died and 332 got injured in 127 accidents across the country.

On the roads and highways, 130 accidents took place which left 180 people dead and 344 others injured.

The casualties include 26 pedestrians who died while five others who got injured.

In the rail routes, two accidents took place in which two persons were killed.

The report also came up with some recommendations for the long run, including public awareness campaigns on road safety in the different media, inclusion of road safety awareness in school curriculum, implementing traffic rules and regulations strictly to curb irregularities, construction of underpasses in the different areas under the city corporations, and giving free trainings or scholarships to poor and unemployed youths to create skilled manpower in this sector, among others.