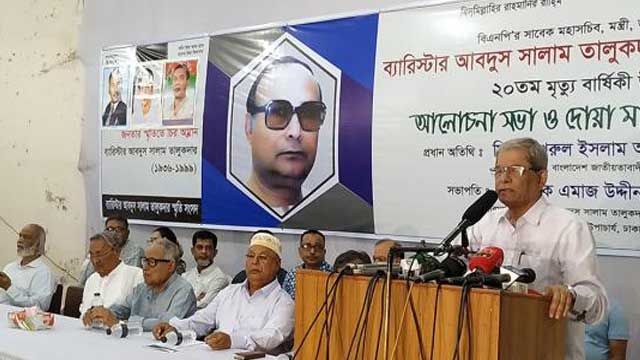 BNP on Sunday voiced concern that the country’s governing system has badly ‘collapsed’ due to the ‘misrule’ by Awami League.

“They (govt) have established a reign of plundering across the country. People belong to Awami League have resorted to looting from everywhere. As a result, the governing system has seriously collapsed,” said BNP secretary general Mirza Fakhrul Islam Alamgir.

He further said, “An unusual and unbearable situation has been prevailing in the country due to the misrule by the government.”

He alleged that the government has destroyed democracy and politics in the country by snatching people’s all rights in a planned way.

The BNP leader said Awami League is following the depoliticisation formula introduced by the 1/11 government in 2007. “They (AL) have taken all steps to eliminate their political opponents to continue the one-party rule.”

He said there are no rule of law, justice and rules and regulations as Awami League has established one-party rule and one party’s supremacy.

To get rid of the situation, Fakhrul urged his party colleagues to get united and organise people to put up a strong resistance against the current government.

“There’s now no alternative to waging a movement uniting the entire nation and all political parties to remove the current monstrous regime. Or else, the spirit of the Liberation War will be destroyed,” he observed.

The BNP leader alleged that the government is destroying the economy, education, health and other important sectors due to its incompetence and failure to govern the country.

Criticising Information Minister Dr Hasan Mahmud for calling BNP a killer party, he said it is Awami League which initiated the politics of killing since 1972 by assassinating thousands of its opponents. “The same party also killed our several thousand leaders and activists since it assumed power in 2009. But BNP has no involvement with any killing.”