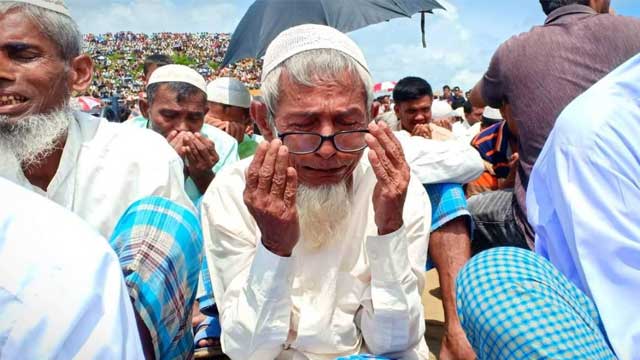 Tens of thousands of Rohingya held demonstrations inside their refugee camps in Bangladesh on Sunday, two years after their exodus.

Nearly 750,000 fled their native Rakhine state in Myanmar in August 2017 as a violent crackdown on the ethnic group surged.

On Thursday, Bangladesh set up a voluntary return scheme – but not a single Rohingya decided to leave.

They are calling for Myanmar to grant them citizenship before they return.

The Rohingya are a Muslim ethnic minority in Myanmar, most of whom live in Rakhine state, and have their own language and culture. But despite living in Myanmar for generations, they are not recognised as citizens or counted in the census.

Myanmar instead considers them to be illegal immigrants from Bangladesh.

The United Nations says it was a "textbook example" of ethnic cleansing; the Rohingya call it a "genocide remembrance day".

Myanmar's military says it was carrying out counterterrorism operations and did not target civilians.

An internal investigation in 2017 cleared the military of blame in the Rohingya crisis.

What now for the Rohingya?

About one million displaced people now live in Bangladesh, most in huge, sprawling refugee camps - the largest of which is home to more than half a million people, placing an economic burden on Bangladesh.

Earlier this year, Bangladesh said it could no longer accept more refugees, as a January 2018 deal between it and Myanmar to repatriate the Rohingya failed to materialise.

But return is voluntary - and barely any have returned while Myanmar continues to deny them citizenship. Myanmar has offered to allow the Rohingya freedom of movement if they accept a national ID card - which Rohingya believe would mean accepting their status as illegal immigrants.

Those who did not flee now number less than half a million in Rakhine. They accuse the government of systemic oppression.

The attempted repatriation on Thursday involved nearly 300 families, with buses ready to bring them back to Myanmar.

The United Nations refugee agency, which interviewed families to see if they wanted to return, said: "So far, none have indicated a willingness to repatriate at this time."

The refugee crisis has brought tremendous domestic political pressure on the government of Bangladeshi Prime Minister Sheikh Hasina, as the host community loses patience with the Rohingya.

Many experts in Bangladesh believe that China has a big role to play in exerting pressure on Myanmar so that it ensures safer conditions for returning refugees.

Another important factor is the law and order situation inside the camps. Incidents suggest an armed group among the Rohingya is getting stronger.

Many people fear that Islamic extremists might be spreading in the refugee camps, which are characterised by extreme poverty.

On the same day, the UN fact-finding mission responsible for uncovering Myanmar human rights abuses, said rape was widely used by soldiers in "the Myanmar military's genocidal intent to destroy the Rohingya population".

It continues in Kachin and Shan states today, the fact-finding mission said.

Sexual violence by the military was "part of a deliberate, well-planned strategy to intimidate, terrorise and punish a civilian population," it concluded.

In Kutupalang, the world's largest refugee camp, prayers and songs rang out as up to 30,000 people took part in marking the anniversary.

Rohingya leader Mohib Ullah said: "We have asked the Burmese (Myanmar) government for dialogue. But we haven't got any response from them yet.

"We were beaten, killed and raped in Rakhine. But still that is our home. And we want to go back."

In their two years of exile, the Rohingya in Kutupalong have opened small shops and built schools in the refugee camp, creating a small sense of normalcy.

"I came from Burma, unable to tolerate the torture there, so I came to Bangladesh," Ali Akbar told Reuters from his phone repair and recharge stall. "Coming here I have started this business, I am happy here."

Mohammed Salim said he fled when his home in Myanmar was burned, crossing jungle to get to the camp where charities provided food and clean water.

"Now we are passing good time, we are happy here... they burned our houses, took away our cattle, seized our lands. If they return our lands, homes and also they give us citizenship then we will go back, otherwise we will not go."

Not everything in the camps is peaceful, however.

On Saturday, Bangladeshi police said they had shot and killed two refugees in Jadimura refugee camp in Cox's Bazar.

The pair who were shot during a manhunt for suspects in the killing of Omar Faruk, an official from the ruling party, allegedly at the hands of armed refugees.

That version of events was called into question by rights activists, who told AFP they believed the encounter had been staged.-BBC