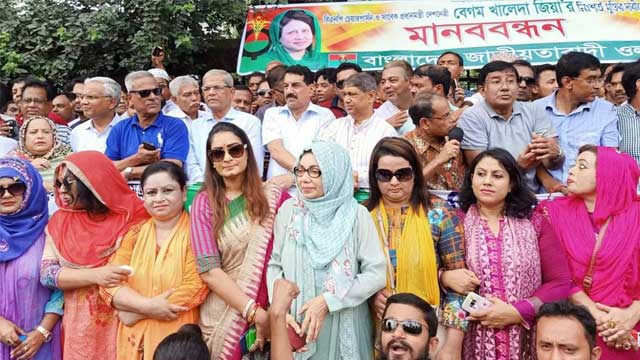 BNP on Wednesday formed a human chain in the city demanding its chairperson Begum Khaleda Zia's release from jail.

Leaders and activists of the party formed the human chain around 11am in front of the Jatiya Press Club.

BNP followers holding banners, festoons and placards joined the programme and chanted various slogans to have their chief freed from jail.

The programme ended peacefully around 12pm as huge law enforcers were deployed around the Press Club to fend off any untoward incident.

On Sunday, Fakhrul announced the programme demanding Khaleda’s release and her proper treatment.

BNP is also scheduled to stage similar programmes on Thursday in all districts and metropolitan cities to press for the demand.

BNP chairperson Khaleda Zia was sent to jail after a special court convicted her in Zia Orphanage Trust graft case on February 8, 2018.

She has been receiving treatment at Bangabandhu Sheikh Mujib Medical University since April 1 last.