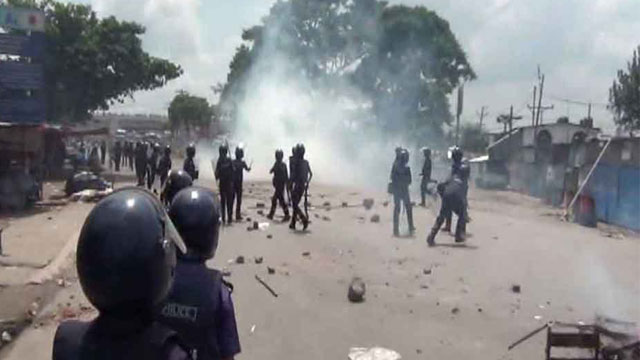 At least 25 people, including police personnel, were injured when a clash broke out between police and garment factory workers in Narayanganj.

The clash broke out around 10:00am on the Dhaka-Sylhet highway’s Kanchpur area on Sunday.

Earlier in the day, workers of Sinha-Opex Garments factory started protesting on the Kanchpur highway to press home their demands, including clearing dues, stop illegal sacking of workers and a few other benefits.

Later, a clash erupted when law enforcers tried to disperse the protesters from the highway.

More than 50 tear shells and a few rounds of rubber bullets were shot at the time.

“When the garment workers’ protest was causing traffic congestion on the highway, police tried to disperse them, but they attacked on the policemen leaving five of them injured,” said Narayanganj Industrial Police 4 In-charge Superintendent of Police (SP) Shaikat Shahin

The situation came under control around 11:25pm.

“Right now, the condition of the highway is fine and the workers have also calmed down. Additional police force has been deployed in the area to avoid any untoward incident,” he added.

The workers, for the last three months, said the factory owners have been sacking worker without prior notice and violated the country’s labour laws by not paying their dues and compensations.

They claimed the factories were not abiding by the rules. Also, those to go to maternity leave were not paid their maternity allowance as well.

The workers also claimed that police without any reason charged baton and tear shell at them, which left at least 20 workers injured.