‘Arsa is not stopping us from going back’ 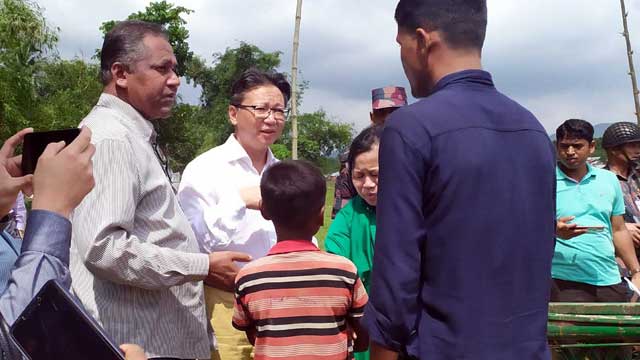 Arakan Rohingya Salvation Army (Arsa) is not barring Rohingya people, who are staying camps in Bangladesh, to return to their homeland Myanmar, says a Rohingya leader.

Dil Mohammad, a Rohingya leader, told this to a Chinese delegation led by its ambassador to Bangladesh Li Jiming on Sunday.

During a long conversation, the Chinese envoy wanted to know if there was any obstacle created by the Arsa of Rakhine in the process of Rohingya repatriation, Dil Mohammad told Dhaka Tribune.

He replied to the envoy: "We are not being barred by anyone. We will return to Myanmar only after being ensured with our citizenship, lands and safety."

Later, the Chinese delegation left the camp and visited the Myanmar border at Ghumdhum point. The delegation talked to the Border Guard Police of Myanmar there.

The delegation is scheduled to visit Rohingya camps at Teknaf in Cox's Bazar on Monday.

Shamsuddouza said: "The Chinese delegation led by its ambassador is on a three-day visit. They visited Rohingya camps and talked to them over their demands for the repatriation."

Meanwhile, another US delegation led by its ambassador to Bangladesh Earl Robert Miller visited Camp No 4 (extension) at Kutupalong's Modhurchhara in Ukhiya, Cox's Bazar on Sunday afternoon. Later, they also visited Camp No 18.

More than 1.1 million Rohingyas are living in a number of refugee camps in Bangladesh.

Over 700,000 of them crossed the border, fleeing brutal persecution carried out by the Myanmar security forces, local Buddhist mobs and people from different ethnic groups since August 25, 2017.