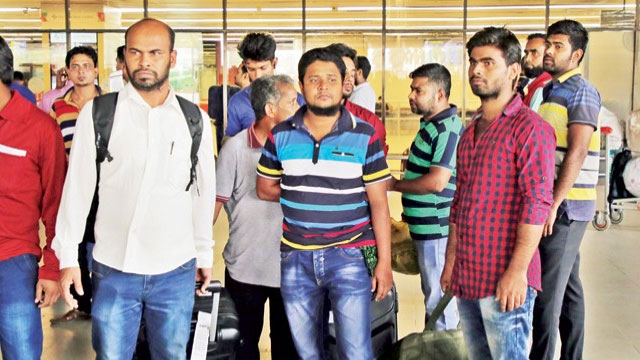 At least 175 Bangladeshi workers were sent back to Bangladesh from Saudi Arabia on Sunday night as the Saudi authorities launched crackdown against documented and undocumented expatriate migrant workers, said the returned workers.

The 175 migrant workers were flown to Hazrat Shahjalal International Airport by a scheduled flight of Saudi Airline (SV-804) that landed at the airport at 11:07pm on Sunday, said officials in Dhaka.

Wage Earners’ Welfare Board assistant director Tanvir Hossain who is also in charge of the welfare desk at HSIA told New Age on Monday morning that it was a big number of the male workers who returned home from Saudi Arabia recently.

He said that many of the returnees might have been arrested and deported from Saudi Arabia even after having valid documents as they changed their workplaces.

Some of the workers said that they were forcibly arrested by police despite having valid work permit and sent to police custody. After serving a short term in jail they were sent back to home by the Saudi police, they said.

On the other hand, some workers said that they failed to renew their work permits due to high charges imposed by their employers.

Around 11,000 Saudi riyals were required for a valid Iqama for one year, they said.

The returned workers, who were mostly from Tangail, Narsingdi, Laxmipur, Noakhali, Munshiganj, Madaripur and Meherpur districts, also said that they were yet to get any help from Bangladesh embassy in Riyadh.

One of the workers, Delwar Hossain of Madaripur, told New Age that he along with other 32 Bangladeshi workers had been arrested by Saudi Police from his living area in Riyadh.

‘Though I had an Iqama (work permit) with six-month validity, I was arrested from a shopping mall where I went for shopping in the afternoon,’ he said.

Delwar who had been working as a security guard at the residence of a Saudi citizen for 11 years, was sent back to home on Sunday night. He said that the crackdown started three months ago and situation got worse recently.

BRAC migration programme officials, posted at the HSIA, received the returned migrants after their arrival at airport and also provided them with some humanitarian supports.

Saudi Arabia is the largest destination for the Bangladeshi workers. Over 20 lakh Bangladeshis are currently working in this Arab country, said officials.