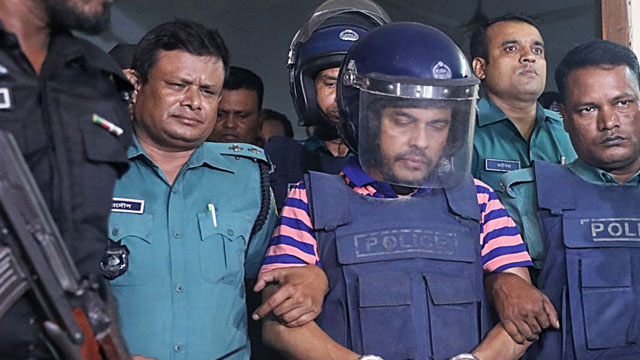 A total of five cases have been filed following the drives conducted by Rapid Action Battalion (RAB) in several illegal casinos in Dhaka.

Four of them were filed against Khalid Mahmud Bhuiyan, organizing secretary of Awami Jubo League’s Dhaka (South) unit, on different charges after he was arrested for running one of those unauthorized establishments.

He said RAB also filed another case against Khalid at Motijheel police station under the Narcotics Control Act.

Later around 8:25pm, he was taken to the Dhaka Chief Metropolitan Magistrate Court. The court, after a quick hearing, sent him into police remand for four days in the arms case and three days in the narcotics case — both filed at Gulshan police station.

RAB official Mizanur said that the fifth case was filed at Motijheel police station over the raid at Dhaka Wanderers’ Club.

The list of accused include three named — Tuhin Munsi, Nobir Hossain Shikdar and Saiful Islam — people and 20-25 unknown others in this case.

In a major clampdown on gamblers, RAB on Wednesday evening raided several illegal casinos in Dhaka city and arrested Khalid, who allegedly ran one of those establishments inside Fakirerpool Youngmen's Club in Fakirapool.

Other illegal casinos at Fakirapool, Banani and Gulistan areas were also raided and sealed. During the raids, the elite force also seized around Tk40 lakh, and large amount of gambling equipment and illegal liquor, among other items, from three of the casinos.

Many of these casinos were reportedly run by leaders of the Awami League’s affiliate organizations, according to sources and locals.

More than 180 men and women, including casino staff and gamblers, were detained during the raids, after which mobile courts jailed them in different terms.