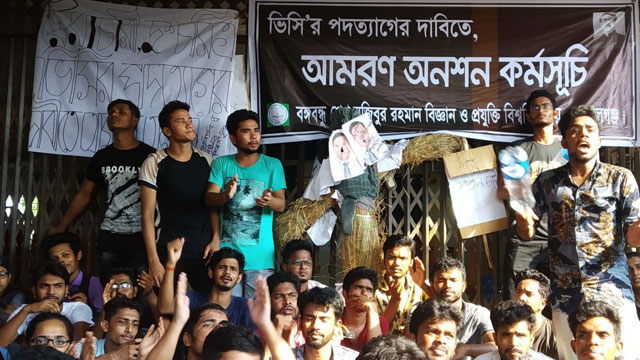 Students of Bangabandhu Sheikh Mujibur Rahman Science and Technology University (BSMRSTU) went on a fast unto death this afternoon to press home their one-point demand -- resignation of its vice chancellor.

The hunger strike began following a scuffle between a group of VC-backed students and the protesters who were staging a sit- in front of the administration building of the university around 1:30pm, according to the witnesses.

The students alleged that VC Khondoker Md Nasiruddin is involved in various misdeeds including recruitment business, misappropriation of money and sexual harassment.

Around 1:00pm, a few of the teachers of the university paid a visit to the demonstrators and tried to convince them to quit the demonstration, but the protesters disagreed and continued their protest.

Earlier in the day, several thousand students of BSMRSTU staged a sit-in in front of the administration building and locked its main gate demanding resignation of the VC.

The gate was locked till 4:00pm when the report was filed, our correspondent reports from the spot.

The students also brought out a procession from Gol Chattor area around 9:00am.

“If any accusations brought against any of the students or teachers of the university, they face inquiries. But if its VC, then no inquiry takes place,” one of the protesters, a student of Department of Law of the university, said seeking anonymity.

“Last year a woman brought allegations of sexual harassment against the VC. Instead of probing the matter, the woman has been given a post of fourth-class official at the university library to keep her mouth shut,” the law student claimed.

Terming the university administration “autocratic”, another protester who is a student of management department said, “If anyone says anything against the autocratic authority, he/she is expelled.”

None of the demonstrators were agreed to disclose their names while talking to The Daily Star as they fear future actions against them by the authorities, our correspondent reports.

The one-point demand came from the protesters around 9:00pm last night on the campus after the authorities announced the withdrawal of the suspension of Fatema Tuz Zinia.

The protesters claimed that the VC took the step in a hurry in order to save his position amid countrywide protests and criticism.

On September 10, university authorities suspended Zinia, a second-year law student and university correspondent for the Daily Sun, for her posts on social media, which the authorities claimed has tarnished university’s image.

Zinia said she did not post any derogatory remark on social media, rather she faced the suspension for her reports on irregularities and corruption in the university.