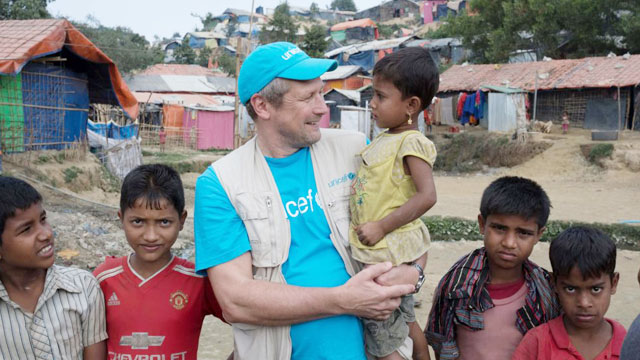 Prime minister Sheikh Hasina on Thursday said Myanmar should take the displaced Rohingyas back as they have emerged as a big burden for Bangladesh.

‘Rohingyas are a big burden for Bangladesh. Local people of Cox’s Bazar have to face sufferings because of them (Rohingyas)... Myanmar should take their citizens back,’ she said.

The prime minister said this when visiting chair of UK All-Party Parliamentary Group Anne Main-headed UK Conservative Friends of Bangladesh and the delegation of UK APPG on Population, Development and Reproductive Health jointly met the prime minister at Ganabhaban in the city.

The prime minister said Bangladesh provided shelter to the Rohingyas on humanitarian ground and extended her sincere thanks to the local people of Cox&#39;s Bazar for enduring sufferings caused by the Rohingyas.

Sheikh Hasina recollected that some 10 million Bangladeshis had taken shelter as refugees in India during the 1971 Liberation War.

The visiting team appreciated Bangladesh for showing the humanitarian gesture by giving shelter to the displaced people.

The UK delegation visited the Rohingya camps in Cox’s Bazar and handed over a written report to the prime minister.

They reiterated their support to Bangladesh over the Rohingya issue.

The policy Bangabandhu had adopted after the 1971 Liberation War to control birth is very effective and the birth control example of Bangladesh is also mentioned in many UK reports, they said adding the socioeconomic development Bangladesh has embarked on is very impressive.

The prime minister said Father of the Nation Bangabandhu Sheikh Mujibur Rahman had a dream to liberate the country and ensure economic emancipation of the people of Bangladesh.

But unfortunately he was assassinated when the progress of the country had started, said Hasina.

She said her government has relentlessly been working to implement the dream of Bangabandhu by making a poverty- and hunger-free Bangladesh.

She said her government is striving for socioeconomic uplift of the country. The main task is to improve the condition of the rural areas and rural masses, she said.

About the health sector, the prime minister said her government set up some 18,000 community clinics to reach the healthcare services to the doorstep of the grassroots people.

She said some 30 free medicines are provided from clinics. Women and children are largely being benefited from the community clinics, the PM added.

About education, she said the government is now providing stipends to mothers of primary school students through electronic transfer system to ensure their enrollment.

About Bangladesh-UK relations, she said Britain has always been assisting Bangladesh in its drive to achieve economic progress.

‘It (the relation) will grow to a great extent,’ the PM was quoted as saying.