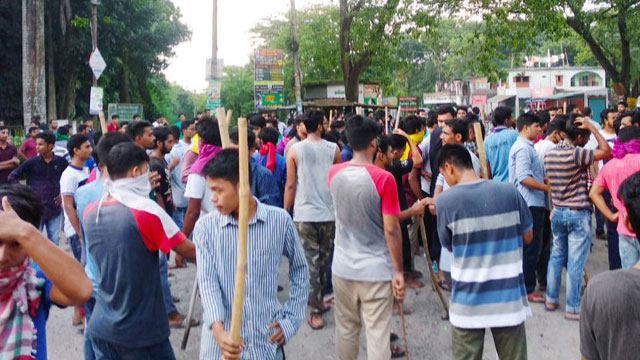 The authorities of Islamic University in Kushtia imposed a ban on all types of processions and meetings on the campus on Saturday.

A press, release signed by IU student advisor Professor Paresh Chandra Barman and acting proctor Anisur Rahman, was issued in this regard in the morning.

Apprehending trouble, the university authorities imposed the restriction as SM Robiul Islam Polash, the university unit incumbent president of Bangladesh Chhatra League, the ruling party-backed student organisation, and its former leaders and activists who did not get any post in the committee, on Friday announced to bring out separate processions on the campus on the same day, demanding trial of the perpetrators who were involved in August 21 grenade attack.

Additional law-enforcers had also been deployed on the campus to avert any kind of unwanted situation.

‘All the students have been asked to bring their identity card with them, otherwise they won’t be allowed to enter the campus,’ Anisur Rahman said.

Earlier, on Friday, around 200 post-deprived leaders and activists of IU BCL unit, led by Jobayer Al-Mahmood and Faisal Siddique Arafat, brought out a rally in front of Bangabandhu Sheikh Mujibur Rahman Hall.

Later, they tried to launch an attack on IU BCL unit secretary Rakibul Islam Rakib in front of the university’s main entrance; but Rakib managed to escape.