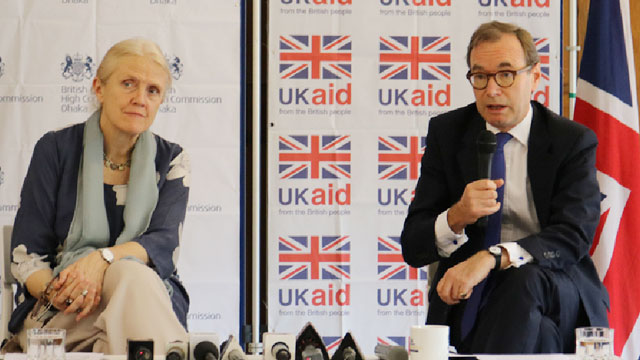 British High Commissioner to Bangladesh Robert Chatterton Dickson on Sunday said Chinese involvement has a “great deal of potential” to help bring the Rohingya crisis to an end noting that involvement of wide range of countries can resolve the crisis.

“We’ve seen there has been greater Chinese engagement. That’s good thing,” he said adding that the Rohingya crisis needs to be resolved by the wide range of countries.

The High Commissioner made the remarks at a media briefing held at his residence in the afternoon. Head of DFID Bangladesh Judith Herbertson was also present.

The envoy said the international community is working hard to ensure safe, voluntary and dignified return of Rohingyas to their place of origin in Myanmar’s Rakhine State.

Chinese Ambassador to Bangladesh Li Jiming recently said China stands ready to “mediate and promote” Rohingya repatriation in an “active manner” to help find a solution as soon as possible.

“As a Chinese saying goes, neighbours are just like family members who stand by each other. If the two neighbours and friends are in need of help, China won’t shy away from it,” he said.

Bangladesh is now hosting over 1.1 million Rohingyas and most of them entered Cox’s Bazar since August 25, 2017.

Ambassador Jiming has recently visited Rohingya camps in Cox’s Bazar what the Chinese Embassy in Dhaka says demonstrates the “strong determination” of China to uphold peace and stability and promote development and prosperity in the region.

Earlier, High Commissioner Dickson and DFID Bangladesh chief Herbertson shared that the UK will give an additional £87 million for sustaining the Rohingya operation in Cox's Bazar, lifting their contribution to a total of 226 million pounds since the start of the Rohingya crisis in August 2017.

Over £20 million is being made available to support development in Cox’s Bazar to mitigate the economic and environmental impact the Rohingya crisis is having on the local communities, it says.

Meanwhile, the European Parliament (EP) reiterated its call on the UN Security Council (UNSC) to impose a “global comprehensive arms embargo” on Myanmar.

It also called for suspending all direct and indirect supplies, sales or transfers of all weapons, munitions and other military and security equipment, as well as provision of training or other military or security assistance.

In its latest resolution, the EP urged the UNSC to adopt targeted individual sanctions, including travel bans and asset freezes, against those who appear responsible for serious crimes under international law.