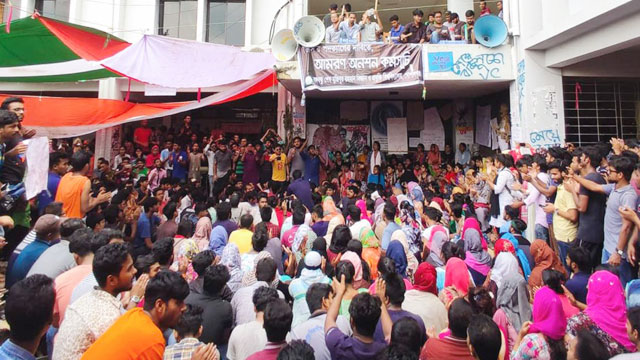 The power and water connections to the dormitories of Gopalganj’s Bangabandhu Sheikh Mujibur Rahman Science and Technology University (BSMRSTU) are still snapped as the students continued their protest on the campus for the fifth consecutive day today.

A good number of teachers also joined them, extending their support to the students demanding resignation of the vice chancellor for his alleged involvement in corruption and irregularities.

Besides, some students are on an indefinite hunger strike in front of the administrative building since Thursday to press home their one-point demand.

Yesterday, the authorities declared a 10-day vacation ahead of Durga Puja and asked the students to vacate dormitories by 10:00am. But the students refused to leave the halls and vowed to continue the protest.

Then, the university authorities severed power and water connections to the dormitories and shut the dining halls to quell their movement triggering immense sufferings to its residents, Shums Jabin, one of the protesters said.

He said they would continue their protests until the VC steps down from his post.

The university authorities have formed a three-member committee led by Science faculty Dean Prof Md Abdur Rahman to probe the attacks on students.

The two other members of the committee are -- Assistant Prof Arefin Shamsul and Law Faculty Dean Prof Kuddus Miah.

Yesterday, at least 20 students including three journalists were injured in an attack by the “hired goons of VC Prof Khondoker Nasiruddin” when they were on their way to campus to join the protest programme.

An Assistant Proctor resigned from his post yesterday protesting the attack on the students.