Abrar murder: VC to sit with Buet students at 5pm 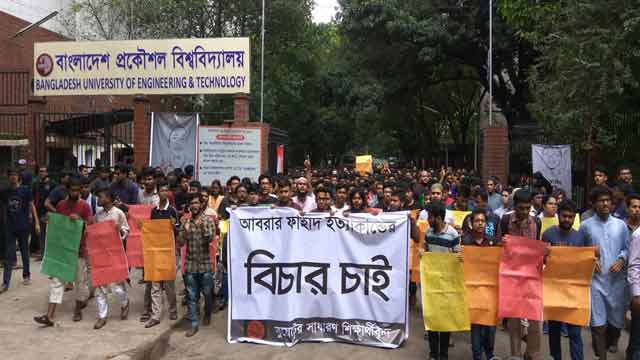 Buet Vice Chancellor Prof Saiful Islam will sit in a meeting with a delegation of protesting students this afternoon to discuss their demands submitted following the death of their fellow Abrar Fahad.

The students and the VC agreed to sit together at the auditorium on the campus around 5:00pm in presence of media, said one of spokesperson while holding a press briefing on the campus today.

The meeting was fixed after the personal secretary of the VC reached out to the protesters yesterday and convinced them for the meeting.

“We have noticed that none of our 10-point demands were realised so far and the administration is also showing reluctance to fulfill them,” the protesters claimed.

The protesters also gave conditions that the media cannot go on live and ask any questions to the VC during the meeting.

Following the briefing, they brought out a procession from in front of the Buet’s Shaheed Minar.

They staged a sit-in in front of the Shaheed Minar demand justice for Abrar, a second-year student of electrical and electronic engineering department who was beaten to death by some BCL men at Sher-e-Bangladesh hall on Monday.

There will be a break in their demonstration for Juma prayers. After the break they will continue their protests till the meeting with the VC.

Yesterday, the protesting students gave the VC until 2:00pm today to make his stance clear about their demands. Otherwise, they would lock down all buildings on campus, the students threaten.

They also threatened to stop the Buet admission tests scheduled for October 14 if the authorities failed to postpone the tests by 5:00pm today.

WHAT ARE THE DEMANDS?
Agitating students placed a fresh 10-point demand on Wednesday, which included capital punishment to the killers, expulsion of all the accused from the university, put an end to all sorts of ragging in the residential halls.

They demanded installation of CCTV cameras on both sides of every wing of the residential halls.

The other demands are withdrawal of Sher-e-Bangla Hall Provost Muhammad Zafar Iqbal Khan by 5:00pm of October 11 for his failure to protect students, compensation to Abrar’s family and bearing their expenses for running legal battle in the murder case.

However, the hall provost resigned yesterday amid the student protest.

HOW MANY PEOPLE WERE ARRESTED SO FAR?
Police have arrested 16 people so far in connection with the murder.

Among them, key suspect Ifti Mosharraf Shakal confessed to beating up Abrar with other Chhatra League leaders.