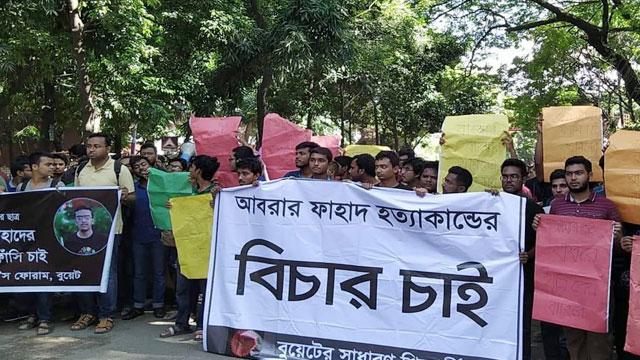 Students of Bangladesh University of Engineering and Technology have postponed their protest programme for two days starting from tomorrow in consideration of the university’s admission test scheduled for October 14 (Monday).

The students will provide assistance to all aspiring students and their guardians who will come to the campus for the admission test, a spokesperson said on behalf of the protesting students.

As the university authorities have already taken noticeable steps in realising some of the students’ 10-point demand, which included ban on organisational politics on campus, the agitating students have decided to have faith on them, the spokesperson added.

Following the announcement at the base of the Buet Shaheed Minar, most of the students were seen going back to their respective halls.

Following a six-day protest over the murder of Buet student Abrar Fahad, the students decided to postponed their programme after a meeting with Vice Chancellor Saiful Islam yesterday.

Abrar, a second-year student of Buet’s electrical and electronic engineering department, was beaten to death by a group of Chhatra League leaders at the university’s Sher-e-Bangla Hall between 7:00pm Sunday and 2:30am on Monday.

The murder triggered a firestorm of protests on university campuses across the country. Many took to the social media to demand justice for Abrar.

Law enforcers suspect, Abrar was attacked because of one of his recent Facebook posts, which seemed critical of some recent deals with India.

Later, the agitating students placed a 10-point demand to the authorities and threatened to go for a tougher movement if the demands are not met immediately.