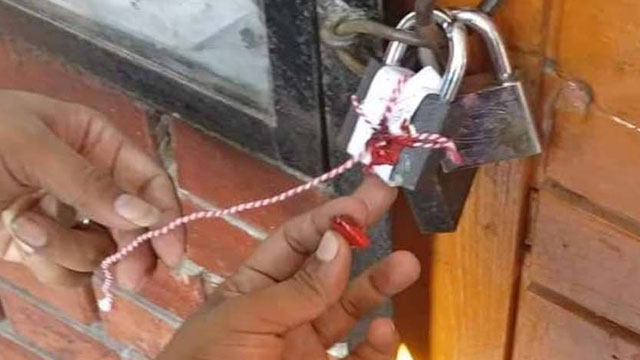 The authorities of Bangladesh University of Engineering and Technology (today) sealed off three rooms of its two separate dormitories for illegal occupancy.

Jami-us-Sani, also the president of Buet’s Bangladesh Chhatra League (BCL)said that he was a boarder of room No. 321 of Ahsan Ullah Hall but the room was sealed off today as his studentship ended a while ago.

On the other hand, the room of BCL's Buet unit general secretary Mehedi Hasan Rasel -- room no. 3012 of Sher-e-Bangla hall—was also sealed off over the same reason, Jami confirmed.

Rasel was arrested in connection with the murder of Buet student Abrar Fahad, who was beaten to death by some BCL men inside the Sher-e-Bangla halls on October 7.

Another room of Ahsan Ullah Hall -- room No. 121 -- was sealed off because it was being used as an office of BCL, Jami further said.

The authorities issued a notice before starting the drive against illegal occupants at halls.

The notice signed by Acting Registrar Dr Md Saidur Rahman also said that the Directorate of Students’ Welfare of Buet will take measures to vacate illegally occupied seats and seal off the offices of student organisations from today.

The notice also reads that if any students are found trying to exercise organization-based politics, disciplinary actions will be taken against them.

Maximum punishment will also be ensured through trial by disciplinary committee if accusations of ragging or torture is raised against anyone, the notice said.

Besides, Buet issued two other notices as per the decision announced during yesterday’s meeting between the vice chancellor and students.

The notices said the university has banned all political parties and its activities on the campus and all expenses of the legal proceedings of Abrar Fahad murder case will be covered by the institution.

The murder of Abrar Fahad, a second-year student of electrical and electronic engineering department, triggered a firestorm of protests on university campuses across the country. Many took to the social media to demand justice for Abrar.

Law enforcers suspect Abrar was attacked because of one of his recent Facebook posts, which seemed critical of some recent deals with India.

Amid student protest, Vice Chancellor Prof Saiful held a meeting with the students yesterday and banned all political activities on the campus.