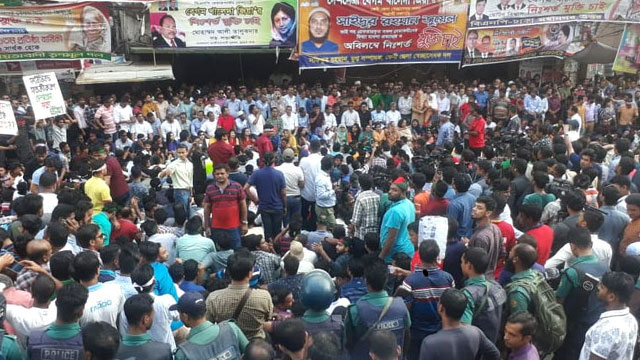 BNP has held a protest rally for the cancellation of the prime minister's recent anti-nationalistic treaty with India, and for the justice of Abrar Fahad murder, amid chase and counter-chase with the police.

The rally started in front of the party's central office in Naya Paltan, Dhaka from around 2pm on Saturday. BNP claimed that it had taken verbal permission from the police to conduct this rally.

Abdus Salam Azad, the assistant organizational secretary of BNP, said: "We informed Dhaka Metropolitan Police (DMP)'s Additional Commissioner Monirul Islam about the rally. Then he told us he would inform the commissioner.

"When we told Monirul our leaders and activists had arrived at the venue, he gave us permission," Azad said.

He added: "We hoped the government would not intervene, and let us conduct this rally peacefully."

However, DMP's Additional Commissioner (Motijheel zone) Mishu Biswas said: "BNP does not have any permission to hold a rally in front of their office. We have not been informed of any such thing."

Police took their place in Naya Paltan from 9am. After BNP leaders and activities arrived at the venue, they engaged in chase and counter-chase with the police around 12pm.

Azad claimed that several of their leaders and activists had been detained by police.