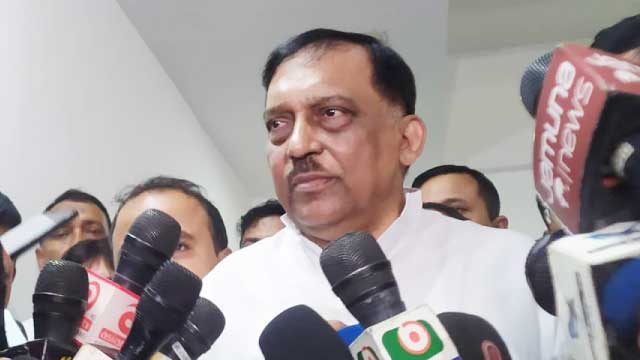 He made the remark in regard to the accidental death of a BSF trooper, in a media briefing, held at the National Press Club on Friday (Oct 18).

He said: "This was an unfortunate event, which should not affect the cordial relationship between Bangladesh and India."

"We are set to identify the conflicting issues between the two forces, and design peaceful solution to restore the friendly bonding between them," he added.

The incident took place 650m inside Bangladesh territory in Balughat’s Shahariaghat area of Baral River under Charghat upazila in Rajshahi, according to a BGB press release.

Replying to a query the minister said a 22-day long ban has been imposed on ilish fishing across Bangladesh to stop the fishermen from catching mother ilish, will begin Saturday and continue till Oct 30.

Meanwhile, three Indian fishermen were seen fishing on Padma River in an engine-run boat 350 yards inside Bangladesh from the zero line under BGB’s Charghat Border Outpost (BOP) around 11am on Thursday (Oct 17).

A BOP patrol team along with Charghat Upazila Fisheries Department's Field Assistant Abu Raihan and two other assistants went to the spot as part of the government’s mother ilish preservation campaign, and detained one of the fishermen, Pranab Mandal, along with illegal current net, while two others fled.

Later, four BSF members from Kagmari BOP under BSF 117th Battalion entered 650 yards inside Bangladesh territory through Shahariaghat in a speedboat. One of them was in uniform while three others were wearing shorts and under-vests. They were also carrying firearms, the release said.

The statement furthered that the exchange of fire took place when BSF members opened fire and tried to snatch the fisherman back.