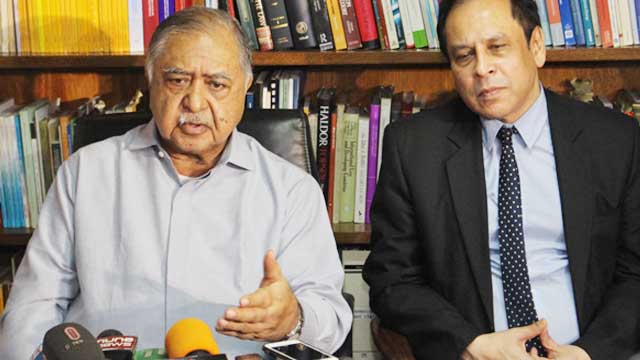 Jatiya Oikyafront Convener Dr Kamal Hossain on Sunday thanked Workers Party President Rashed Khan Menon, MP for what he said confirming that people could not cast their votes in the December-30 national election.

“I’m happy he (Menon) did it, even if it’s late. I’ve long been saying it (people could not cast their votes),” he said.

Dr Kamal further said, “Wherever I go I ask people whether they could cast their votes on December 30. I still didn’t get a single positive response to it, and he (Menon) has now confirmed it. That’s why I thank him.”

He came up with the remarks while talking to reporters after a meeting of Jatiya Oikyafront’s steering committee at his Motijheel chamber.

On Saturday, Menon at a programme in Barishal said people could not cast their votes in the December-30 polls and subsequent local body ones.

About their planned public rally at Suhrawardy Udyan on Tuesday, Dr Kamal said they still did not get permission for it. “We strongly urge the government to give the permission soon. We’ve the right to hold meetings and express our opinions.”

He also said giving permission for a rally is not a matter of the government’s mercy since the Constitution enshrined people’s right to hold meeting and make statements freely. “We’re not going to fight with the government in the rally as we’ll make our statements there in favour of people.”

Dr Kamal, also the president of Gonoforum, said the government should give Oikyafront permission without further delay obeying the Constitution and showing respect for democracy.

Jatiya Samajtantrik Dal President ASM Abdur Rob said the government is not saying anything clearly about the permission for the rally.

“We want to see what the government does. If it wants to deprive us of our civic and basic rights, we together with the country’s 17 crore people will establish our rights,” he warned.

Rob alleged that the government is not following any law and the Constitution, creating an appalling situation in the country. “Neither the country nor its people are now safe.”

He said they will start collecting mass signatures at home and abroad soon protesting the murder of Buet student Abrar Fahad, and will submit those in different international organisations, including the United Nations, depicting how the government is showing ‘inhuman’ attitude to people.

Rob questioned as to why the government is only arresting some ‘small fry’ like ward commissioners sparing the big fish in the ongoing anti-corruption purge.