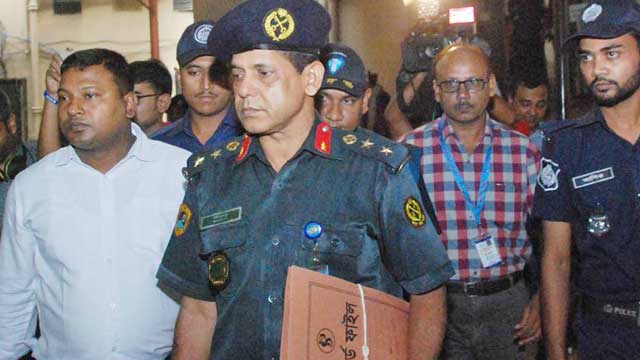 A Dhaka court on Sunday sent Deputy Inspector General (DIG) of prisons Md Bazlur Rashid to jail, in a case filed for amassing wealth beyond known sources of income.

Acting judge Al Mamun Bhuiyan of the Dhaka Metropolitan Sessions Judge Court passed the order after investigation officer and Anti-Corruption Commission (ACC) Deputy Director Md Nasir Uddin produced the accused before the court, and pleaded to keep him behind bars until the disposal of the case.

Rashid’s counsel pleaded for his bail. After hearing both sides, the court sent him to jail.

The DIG was shown as arrested in a case filed by the ACC for amassing illegal wealth.

Earlier, the commission interrogated Bazlur for three hours at its office in Segunbagicha, and later arrested him in a case filed on Sunday under Section 27 (1) of the Anti Corruption Commission Act for purchasing a flat in Siddheswari at a cost of Tk3.08 crore, the amount amassed via illegal means.

The First Information Report (FIR) says the official bought the 2,981 square feet apartment at Rupayan Housing in Siddeswari, but failed to show any legal source of income for the payment.

There was no information on the flat in his income tax documents, which suggests the payment was made with money beyond the DIG prisons’ known sources of income, said ACC Secretary Muhammad Delwar Bakht.

On April 24, 2018, The DIG prisons signed an agreement with Rupayan Housing Estate to buy the apartment. He paid Tk54,000 since June 7, 2018 via cheques of United Commercial Bank, while the rest of the money was paid in cash.

Media reports claim the DIG prisons used to collect bribes via courier services, and the money was accepted by his wife Rajjaqun Nahar.

Earlier in July, Sylhet Deputy Inspector General (DIG) of Prisons Partha Gopal Banik was sent to jail in a money laundering case filed by the ACC.

The arrest came after a drive conducted at his residence, during which Tk80 lakh amassed through unknown means was seized.

DIG Partha was allegedly involved in corruption, and other irregularities while serving as DIG (Prisons) at Chittagong Range.