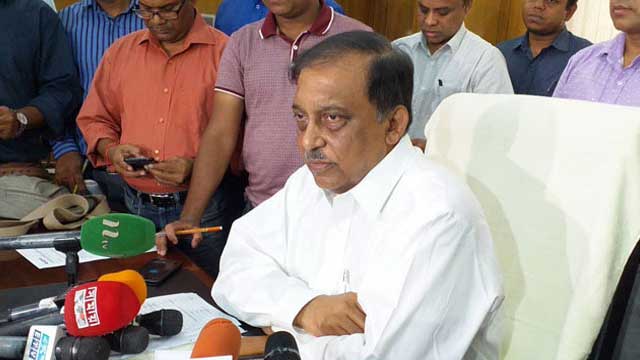 Mentioning that prima facie evidence suggest that police opened fire on the demonstrators in Bhola in self-defence, Home Minister Asaduzzaman Khan on Monday said they were investigating whether there was any negligence on the part of police and others.

“Whether there’s any negligence of duty on the part of police or others is under investigation and legal action will be taken if anyone is found guilty,” he said while talking to reporters after a meeting with a delegation of Oikyafront at the Secretariat.

The minister said he talked to the local MP and the officer-in-charge of the police station concerned and came to know that people under the banner of ‘Touhidi Janata’ held a rally protesting a Facebook post made from the hacked ID of a young man of a minority community demeaning religion.

At one age, some 300 people from the rally ran amok and tried to break the door of a room where the OC, other police officers and UNO took shelter, he said, adding that they heard the UNO ordered the firing at that time.

Asaduzzaman, however, said it will be known after investigation as to who passed the order to fire gunshots.

Expressing shock over the incident, he said the local MP went to the spot immediately after the incident and took steps for the treatment of the injured. He also provided financial assistance to the families of the deceased.

The minister also said they sought assistance of the Facebook authorities to find out the real culprit who made the derogatory comments about Prophet Muhammad (pubh). “We’ve sent necessary information to the Singapore office of Facebook and details will be known within two or three days,” he said.

Four people were killed and about 200 others injured in a clash between police and demonstrating locals in Borhanuddin upazila of Bhola, demanding the punishment of a youth for allegedly hurting religious sentiments on the social media.