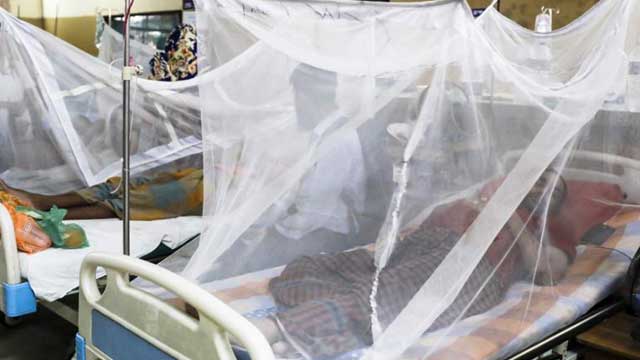 The government has updated its tally of dengue fever-related deaths so far this year to 104 from even though media reports put the fatality count nears 200 deaths.

In a statement on Monday (Oct 21), the Health Emergency Operation Centre and Control Room at the Directorate General of Health Services (DGHS) has updated the official death toll over dengue to 104 from 94 on Oct 15.

A total of 217 dengue patients have been admitted to different hospitals across Bangladesh in the 24 hours till 8am on Monday.

A total of 92 new patients were admitted in Dhaka and 142 in districts outside Dhaka during the same time.

Dengue, a mosquito-borne virus, spreads among humans through its carrier, the Aedes mosquito.

As many as 409 patients have currently been receiving treatment in 41 government and private hospitals in Dhaka, whereas 507 people were undergoing treatment outside Dhaka, the DGHS data said.

Among those admitted, a total of 92,643 have been released from their respective hospitals and clinics after treatment.

Any fever is now suspected to be dengue and people are advised to see doctors.

Doctors suggest taking rest and plenty of fluids such as oral saline, coconut water, juices in fever. Medicines other than paracetamol are restricted without the doctor's advice.

Searching for and destroying mosquito breeding places, use of mosquito net as well as repellents, and seeking early consultation when the first signs and symptoms of the disease appear are the most effective ways to prevent and cure dengue.

An analysis of the data reveals that men and women in 15 years to 25 years age group are the worst hit, followed by people aged between 25 and 35, and 5 years and 15 years. It means people with active age group are the most affected, causing economic impacts due to hospitalisation.