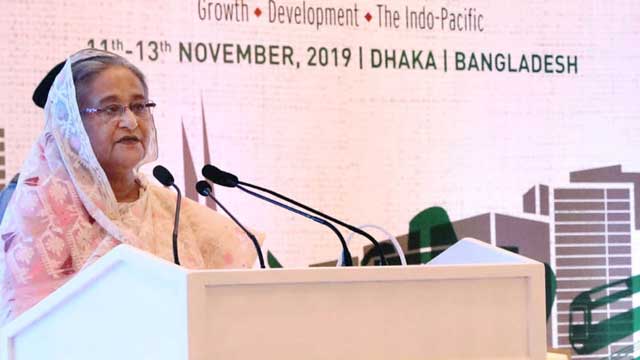 Prime Minister Sheikh Hasina on Monday said the 1.1 million Rohingyas, who were given shelter in Bangladesh after they fled from Myanmar in the face of persecution, were not only a threat to the security for this country but also the region.

“I urge the world community to take appropriate action, realising the gravity of the threat,” she said, while addressing the inauguration ceremony of the three-day Dhaka Global Dialogue, reports UNB.

“Growth, development and Indo-Pacific” is the theme of the dialogue, where over 150 international participants are taking part for keynote presentations, panel discussions, speed talks and live casts.

Prime Minister Hasina said the current century was being considered as the “Century of Asia” in terms of socio-economic development and prosperity, adding: “I think that peace and harmony must be maintained for the prosperity of the region.”

She said poverty was the common enemy of the countries of this region. “Therefore, the main goal of all our activities should be directed to eradicate people's poverty and ensure their comfortable lives with economic development.”

She said Bangladesh was geographically a country ashore of the Bay of Bengal and as such of the Indian Ocean. “This ocean has huge significance for various reasons. Indian Ocean consists of a number of vital maritime routes, which contribute significantly to the largest economies of Asia.”

Half of the global container shipment and 80% of global fuel trade pass through the Indian Ocean, she said, while 16.8% of the global reserve of oil and 27.9% of natural gas were in this ocean. Also, 28% of the total fisheries are collected from Indian Ocean.

“Indian Ocean, being the source of immense resources and the part of strategically important seaways, is thus considered very important,” Hasina added.