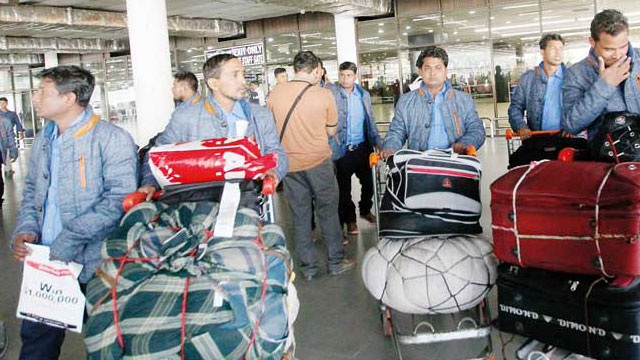 Saudi Arabia sent back 87 more Bangladeshis on Thursday night and Friday, taking the number of deportees to 1,647 in the last two weeks.

A Saudi Airlines flight carrying 86 deportees landed at Hazrat Shahjalal International Airport at 11:20pm on Thursday.
Later, Sumi Akter, a Bangladeshi worker who went viral on social media recently, returned home on another Saudi Airlines flight at 7:15am on Friday.
Tales of misery by the deportees are almost similar to those told by other Bangladeshi workers deported earlier.

Liton, who went to the kingdom just 45 days ago, said he had been deported despite having valid visa. Dulal Hossain from Brahmanbaria said Saudi police picked him up when he was going to market and deported him.

“I went there six months ago spending Tk 4.5 lakh,” he added.

Some of the deportees alleged that the employers (Kafil) did not provide residence permits (Akama) even after paying necessary amount.

When police detain a worker, the employer does not take responsibility and instructs to deport him, they said.

Meanwhile, Director of Wage Earners’ Welfare Board Md Jahirul Islam received Sumi Akter at Dhaka airport in the morning. She was not allowed to speak with the media.

After completing procedures, a team of Wage Earners’ Welfare Board brought her out with high security and left the airport for Panchagarh.

A video went viral on social media few days ago where Sumi was seen asking for help to be saved from the torture by her employer in Saudi Arabia.

Later, her husband Nurul Islam lodged a general diary with Paltan Police Station in this regard.
Finally, she was brought back with the help of the authorities and Brac’s migration programme.
Sumi went to Saudi Arabia as a domestic help on May 30.