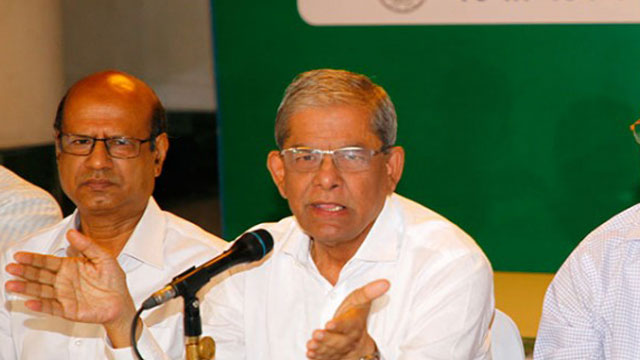 BNP Secretary General Mirza Fakhrul Islam Alamgir has said Bangladesh’s many pending problems with India could not be resolved as the current government has no bargaining capacity.

“We do not want to speak against India as we have no conflict with that country. The main problem is that now we have such a government in power that has no capacity to talk to India about our problems,” he claimed on Saturday, reports UNB.

Speaking at a seminar, Fakhrul further alleged: “The government has no bargaining capacity to address the problems with India, as it always depends on the country to hang on to power. This is the reality.”

Association of Engineers, Bangladesh, a pro-BNP platform of engineers, arranged the program at a city hotel to shed light on the possible adverse impacts Bangladesh may face due to the Feni river water withdrawal deal with India.

Fakhrul expressed his opinion that people have to realize that the longer the current government stays in power, the more Bangladesh’s interests will be harmed, and its resources will get depleted.

Stating that the Feni river is Bangladesh’s river, not a common one, he alleged the government is allowing India to withdraw its water.

“The prime minister said how she can refuse if anyone seeks water for drinking. That is fine. But she did not say anything about the sufferings of millions of our people, whose crops and livelihoods are being destroyed due to lack of water from the Teesta river.”

The BNP leader said India has long been refusing to give Bangladesh water from the Teesta, while the issue of ensuring the fair share of water of other common rivers also remains unresolved.

He alleged Bangladeshis are getting killed along the border, but the government says the border killing has dropped substantially. “In fact, we do not see any fall in border killing.”