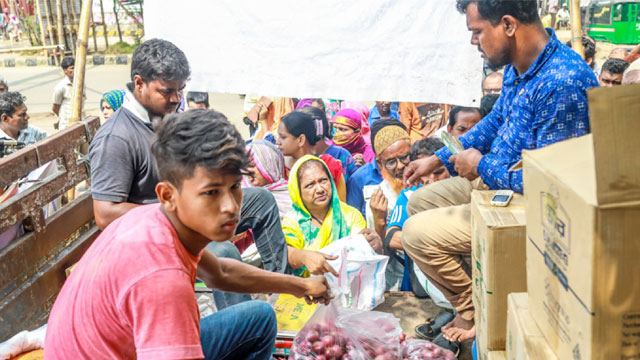 BNP will stage protest rallies across the country on Monday against the unusual hike in the prices of essentials, including onion.

The decision was taken at a meeting of BNP standing committee members held at the party chairperson’s Gulshan office on Saturday.

“The price of onion has unusually increased, and it’s already proved that a government-backed syndicate is involved with it. Not only onion, but also the prices of all the essentials marked a sharp rise due to the government’s failure,” said BNP Secretary General Mirza Fakhrul Islam Alamgir.

Briefing reporters after the meeting, he further said, “We’ll hold protest rallies all over the country, including Dhaka, on Monday against the unusual increase in the prices of onion and other daily essentials.”

Fakhrul said their party also decided to participate in the public hearing to be held on November 28 on the government’s proposal to raise the power tariff again.

He said a team of their party, led by its standing committee member Iqbal Hasan Mahmud Tuku, will join the public hearing and present their party’s views on it.

As per their earlier decision, the BNP leader said, their party will send a letter to Prime Minister Sheikh Hasina either on Sunday or Monday seeking detailed information about the bilateral documents signed with India during her visit to the neighbouring country last month.

He alleged that the tenure and expenditure of the Padma Bridge project have been increased again for plundering more public money.

Fakhrul said their meeting denounced the derogatory remarks of Jatiya Party Secretary General Moshiur Rahman Ranga against Noor Hossain, and demanded parliament take punitive action against him. “We think such a person shouldn’t have the membership of parliament.”

He criticised the Prime Minister for taking position in favour of the Jahangirnagar University Vice-chancellor, saying it is very regrettable.

The BNP leader said their party has extended its support to the movement of Jahangirnagar University teachers and students against its VC as the party thinks their demands are justified ones.

He said another appeal will be filed on Sunday seeking bail for their chairperson Khaleda Zia as her health condition is very bad. “We hope the judiciary will work independently and grant her (Khaleda) bail on health grounds as she deserves it. We expect she’ll get justice from the court.”