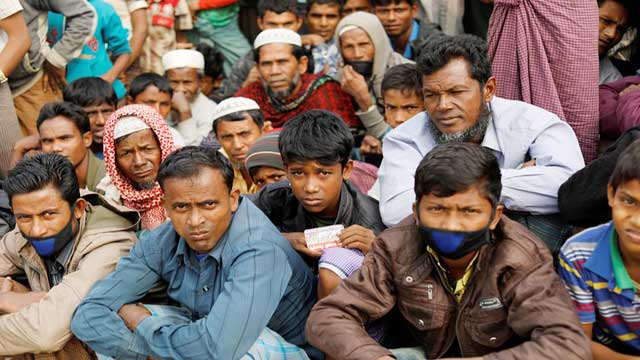 Dhaka, Jan 20 (Just News) : The Rohingya crisis in Bangladesh is growing at a rapid pace and there is an urgent need to support the host communities to cope with the influx and to help the refugees who are extremely vulnerable, the World Bank said on Saturday.

After visiting the Rohingya camps in the Cox’s Bazar area, World Bank South Asia Region vice-president Annette Dixon praised the government of Bangladesh and its people for sheltering and caring for the large influx of Rohingyas fleeing violence in Myanmar.

She said the World Bank was ready to work with the government to help the host community and the displaced Rohingya people in Cox’s Bazar.

‘The scale of the influx is enormous. As far as the eyes can see, lines after lines of shelters — made of plastic sheets and bamboos — stretched over the deforested hills. It is creating huge pressure on the infrastructure and services as well as on the water resources and the environment. When the monsoon approaches, the challenges with disease and natural disasters will increase,’ she said.

She visited the registered and makeshift camps and spoke with the Rohingya and the local community. She also visited registration centres, health and food distribution centres, children centres and women-friendly spaces.

‘The people and the government of Bangladesh have shown great generosity to the Rohingya people in their hour of need. As soon as the crisis broke, with the government, the local and international non-governmental organizations and development partners extended support. This helped save thousands of lives,’ Dixon said.

‘But the needs are much greater. If the government seeks assistance, we can mobilise more resources to address the needs of both the host communities and the Rohingya people in a way that will continue to benefit the local people after the Rohingya leave.’

Dixon met local government officials and representatives of the many Bangladeshi and international relief agencies and NGOs that are working to support the Rohingya population in the Cox’s Bazar area.

Earlier in the week, Dixon spoke at the invitation of the government at the Bangladesh Development Forum in Dhaka. She praised Bangladesh’s remarkable success in reducing poverty and advancing development.

In the recent years, the World Bank support to Bangladesh has expanded. Currently, the World Bank’s support stands at nearly $10 billion, which represents a more than doubling in the last five years.

The World Bank was among the first development partners to support Bangladesh following its independence. Since then, the World Bank has committed close to $27 billion in grants and interest-free credits to the country.