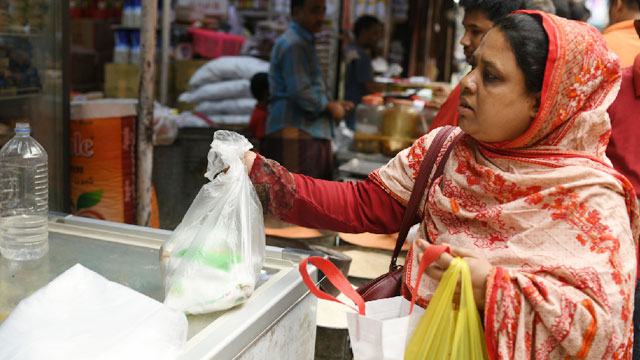 Following rumours that salt is getting pricier, consumers across the country throng shops to buy the cooking ingredient. A woman was seen buying salt at a shop in the city. Photo: Zabed Hasnain Chowdhury

The government on Tuesday urged all not to get confused with misleading information over salt stock and price being spread by an unscrupulous group saying the current salt reserve is much more than the country needs.

“There’s no shortage of salt. At present, the salt stock in the country is much higher than the demand,” said Chairman of Bangladesh Small & Cottage Industries Corporation (BSCIC) Md Mostaque Hassan.

He said an unholy syndicate is trying to reap benefits by spreading misleading information through online media. “The people of the country are requested not to get confused.”

He said the government attained self-sufficiency in salt production due to hard work of the salt farmers and government’s policy support.

At the directives from the Industries Ministry, a control room has been opened at the BSCIC headquarters (Phone No: 02-9573505, mobile phone: 01715223949) for all the salt-related information.

The ministry also said the salt production season began this month and the new supply of salt, produced in Kutubdia and Moheshkhali upazilas of Cox’s Bazar, started coming to the market.

Adequate stocks of salt are also there with various salt dealers, wholesalers and retailers, said the government.

The monthly demand of edible salt in the country is more or less 1 lakh metric tonne whereas the current stock is over 6.50 lakh metric tonnes, said the Industries Ministry adding, “There’s no question of shortage or crisis of salt.”

The government said it appears that a vested group, in an unholy approach, is spreading rumor, to make hefty profit and destabilize the salt market.

The Industries Ministry urged all not to get confused by the rumors.