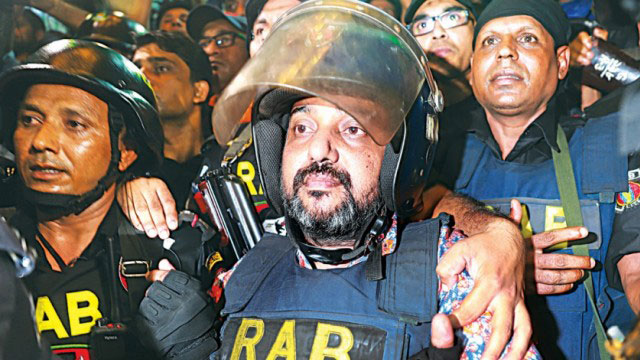 Earlier on October 15, Samrat was remanded for a 10-day in the cases filed under the Arms and Narcotics Control Acts while Arman remand for five days in the drug case.

Samrat was earlier charged with the case filed for possessing a pistol with five bullets at his Kakrail office.

He was also remanded in the case filed for amassing illegal wealth.

On October 6, Rab arrested Samrat, the then president of Dhaka South Jubo League, and his close aide Enamul Haque Arman, former vice-president of the same unit, from Cumilla, raiding a house near the Indian border.

Samrat was then brought to the capital and the elite force conducted operations at various establishments where the Jubo League leader either lived or carried out political and business activities.

Rab also took Samrat to his political office in Kakrail area where he has been reportedly staying since the crackdown against the casino began on September 18.

Following a five-hour search at the office, the elite force at a press briefing, said it seised two electric machines used for torturing people, a pistol with five bullets, two hides of Kangaroo, 1,160 pieces of Yaba and 19 bottles of foreign liquor from there.

Rab filed the two cases against him with Ramna Police Station under the Arms and Narcotics Control Acts on the next day.

According to the sources and media reports, Samrat, along with several hundred of his supporters, dug in at his Kakrail office soon after the drive started on September 18.