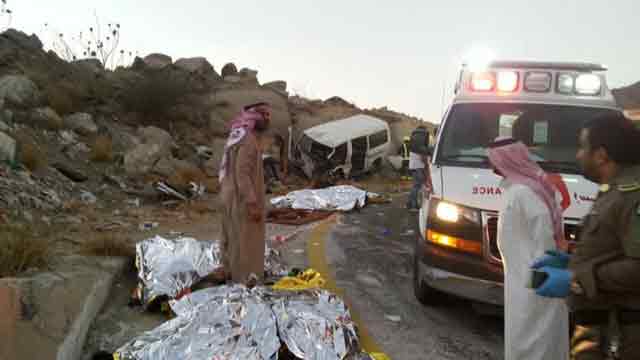 Dhaka, Jan 22 (Just News): Nine workers, including three Bangladeshis, were killed and six others injured in a road accident in Al-Baha province in Saudi Arabia on Saturday evening, reports the Saudi Gazette.

Four Egyptians and two Indians were among the deceased.

The workers, belonging to a catering company that supplies food to patients in Baljurashi hospital, were going to Qunfuda corniche to spend their day-off when the van they were travelling in overturned on a mountainous road.

Apparently due to time constraint, they opted to take the mountainous route.

Prince Hossam Bin Saud Bin Abdul Aziz, emir of Al-Baha region, offered condolences to the families of the deceased and wished speedy recovery to the injured.

Saudi Red Crescent Authority along with the ministry of health and civil defence emergency teams rushed to the site of the accident and shifted the injured to Prince Mishari hospital in Baljurashi.

Two critically injured victims-an Indian and a Bangladeshi-were shifted to King Fahad hospital in Al-Baha where the Indian worker succumbed to his injuries.