Hindu voters urged to refrain from voting on puja day 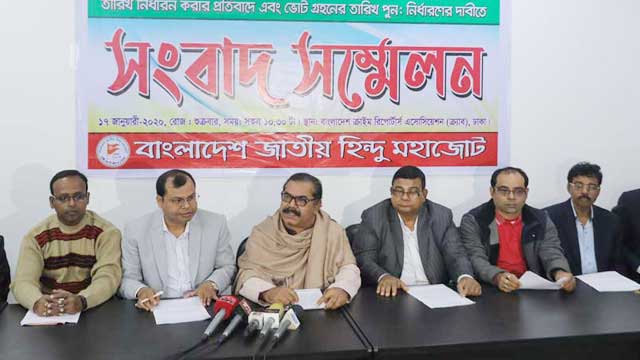 Leaders of the Hindu community have urged their voters to refrain from voting if the Election Commission does not reschedule the upcoming Dhaka city polls.

The elections are slated for January 30, the same day as Saraswati Puja.

Representatives of Bangladesh Jatiyo Hindu Mohajote made the announcement during a press conference at the Dhaka Reporters’ Unity on Friday.

They also announced fresh protest plans on the day of the election if their demand is not met.

"Do not go to the polling stations if you are Hindu. Do not take part in any campaigns related to the mayoral elections,” said Palash Kanti Dey, executive secretary of the alliance.

He said they would bring out a black flag procession and observe Saraswati Puja in front of National Press Club in Dhaka on January 30, if the city polls are not rescheduled.

On December 22 last year, once the Election Commission announced the schedule for the Dhaka North and Dhaka South city corporation elections, the Hindu community immediately voiced its opposition regarding the decision as the Saraswati Puja falls on January 29-30.

Amid the growing protests, the commission on Wednesday said it was determined to hold the polls on January 30 as there was no scope for deferring it.

Shyamal Kumar Roy, chief coordinator of Bangladesh Jatiyo Hindu Mohajote, said: “There is still time for rescheduling the city polls. The commission can shift the date and hold the elections on any day before January 30."

He further warned: “We will go for stern protest if the polls date is not changed."

Echoing Shyamal, human rights activist Mrityunjoy Mondol said it was a matter of great disappointment that the neighbouring country India would celebrate Saraswati Puja while the Bangladeshi Hindu community would be busy voting.