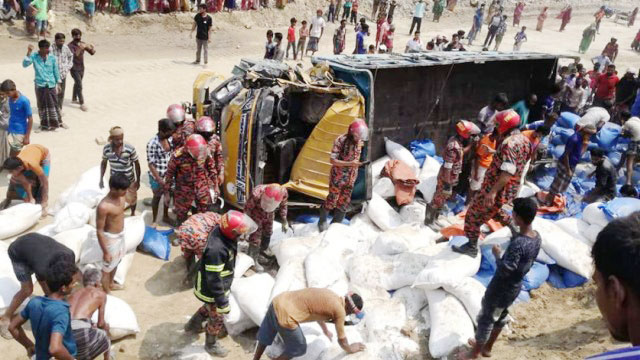 At least five people were killed and 14 injured in a head-on collision between a bus and a truck in Sherpur Upazila in Bogura district this morning.

The accident took place around 11:00am at Ghogabottola area, according to our Bogura correspondent, who quoted Humayun Kabir, officer-in-charge of Sherpur Police Station.

Ratan Hossain, in-charge Sherpur Fire Station, said six persons were on the top of a salt-laden truck, which was headed towards Bogura from Chattogram.

Four of them died on the spot and two injured when they were crushed under the salt sacks, after it collided with the bus heading towards Dhaka from Bogura.

One of the injured died at Shaheed Ziaur Rahman Medical College Hospital around 1:00pm, said Abdul Wadud, assistant director of the hospital.

Nazir Hossain, a passenger of the truck, however said there were at least 25 passengers on the salt-laden truck.

The other injured are bus passengers.

Identities of the deceased could not be known immediately.

The injured were rushed to Shaheed Ziaur Rahman Medical College Hospital where another succumbed around 1:00pm, said Abdul Wadud, assistant director of the hospital.