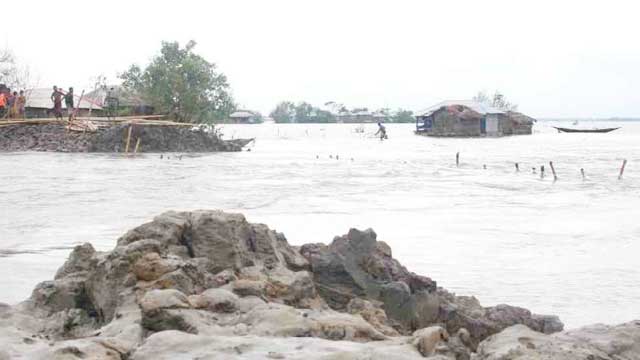 Kalpana Rani had forcibly been taken to a shelter before cyclone Amphan hit last week. When she returned, she found her house situated in the vicinity of the Sholmarri River completely shattered.

Her blank gaze hovered over where her little house used to be.

Cyclone Amphan left a trail of destruction in the coastal regions of Bangladesh still reeling from cyclone Aila which hit 11 years ago.

Amphan damaged thousands of houses and shops in the region -- the lucky ones partially and others completely.

The cyclone, which hit the coast on Wednesday evening, only added more sufferings to the people amid the coronavirus outbreak just before Eid.

A 10-km stretch of the dam in Khulna collapsed completely, flooding the low-lying areas and washing away fish enclosures and ponds. Crops on 1,700 hectares have been damaged.

Palash Kumar Banerjee, executive engineer of Water Development Board Khulna-2, said a 40-km of embankment has been damaged while a 10-km stretch has completely been destroyed in Koyra upazila.

Akhtaruzzaman Babu, MP of Khulna-6 constituency, said the worst-hit upazila is Koyra and estimated the damage to be Tk 50 crore.

In Satkhira, 12,257 fish enclosure and ponds have been washed away. Deputy Commissioner SM Mostafa Kamal said fish enclosures on 13,477 hectares in 12 unions of Shyamnagar, Asashuni and Kaliganj were flooded.

These enclosures had 1,677 mts of fish and 2,531 mts of shrimp. The worst affected are the fish farmers are from Gabura, Padmapukur, Burigoalini and Kaliganj upazilas adjacent to the Sundarbans.

DC Kamal said 370,000 people had been taken to 1,907 shelter centres before the cyclone. Before the storm, 350 mts of rice were allocated and another 375 mts have been allocated afresh. Bundles of corrugated tin-sheet and cash have been distributed among the victims.

DC Mamunur Rashid said there was no casualties as most people from the coastal areas were brought to shelters well before the storm.

But many people, like Mustajibul Haque, have lost everything.

Haque, a resident of Koyra, said they are still reeling from cyclone Aila. “Cyclone Amphan hit when our wounds from Aila are yet to heal. Amphan wrecked our lives and destroyed whatever we had rebuilt,” he said. “It'll be difficult to live here, if there’s no sustainable dam.”