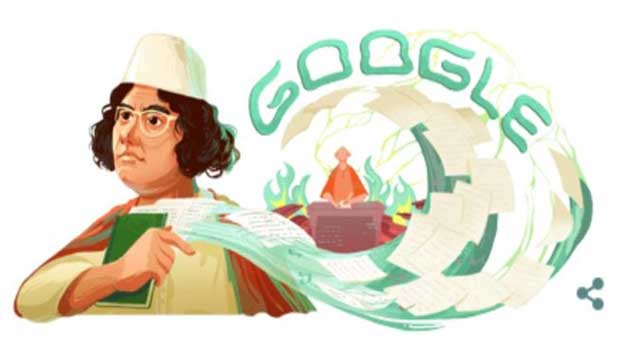 Nazrul’s famous revolutionary poem “Bidrohi” (The Rebel), which was marked by a vehement stance against colonialism and global oppression, inspired the doodle artwork, says the tech giant on their website.

A prominent voice of the Indian independence movement, Nazrul was a fierce advocate for religious tolerance, freedom, and the fight against injustice, earning him the nickname “Bidrohi Kobi” (Rebel Poet).

Nazrul Islam was born on this day in 1899 in Bardhaman district of the Indian state of West Bengal.

As a youth, he developed an interest in poetry and literature through his involvement with his uncle’s travelling theatre group.

After several years in the British Indian Army during World War I, Nazrul moved to Kolkata and in 1922 published his famous revolutionary poem “Bidrohi” (The Rebel).

Nazrul’s subversive writing—much of which he published in his own magazine, Dhumketu (The Comet)—resulted in frequent imprisonment, which in turn inspired one of his most well-known works, “Rajbondir Jobanbondi'' ('The Deposition of a Political Prisoner, 1923).

He used his platform to combat bigotry in all its forms, and through his poetry supported the equality of women at a time when few of his peers were willing to do the same.

Not to be confined to the written word, Nazrul also wrote some 4,000 songs, which brought him national popularity and spawned an entirely new genre called Nazrul Geeti (Music of Nazrul).

For his incredible literary contributions, Nazrul was named the national poet of Bangladesh in 1972.