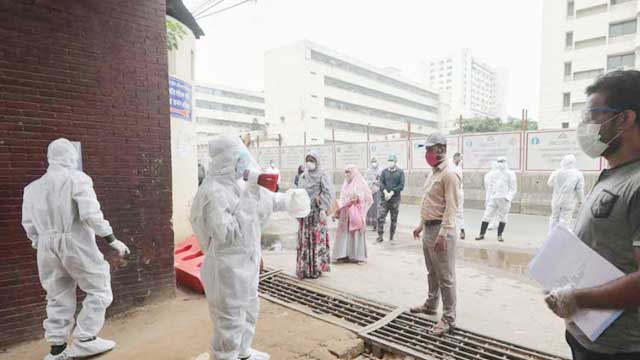 The health authorities reported detection of 1,166 new coronavirus cases in the last 24 hours, pushing up the total number of confirmed cases in the country to 36,751.

"Twenty-one patients died during this period, taking the death tally to 522,” Prof Dr Nasima Sultana, the Additional Director General of the Directorate General of Health Services (DGHS), said at a regular briefing.

Bangladesh reported its first cases on March 8 and the first death on March 18.

The country has seen a spurt in daily coronavirus cases since mid-April. At that time, the health authorities declared the whole of Bangladesh vulnerable to infection and imposed heavy restrictions on movement.

In late March, the government shut down all non-essential services and announced a general holiday to contain the transmission of the virus, first reported in China in December last year.

But health experts expressed concerns over the decision to allow people to travel to their home districts during the Eid holidays, fearing that it will worsen the coronavirus situation in the coming days.

Globally, the number of confirmed cases inched closer to 5.5 million on Tuesday and the death toll climbed to 346,232, according to the Centre for System Science and Engineering of the Johns Hopkins University.

Among the countries, the US has been the worst-hit with the highest recorded deaths of 98,220 patients and about 1.7 million confirmed cases.

Brazil now has the second-highest number of confirmed cases (374,898).

Some countries like China and New Zealand seem to have the pandemic under control. Besides, Europe is in the process of lifting lockdown, but in the Americas, the pandemic is still in full swing - especially in South America.