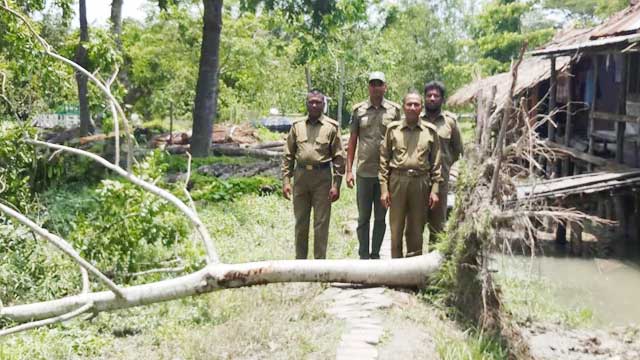 Cyclone Amphan that battered the country’s coastal districts on Wednesday damaged infrastructures and trees worth Tk 1.67 crore in the Sundarbans’ eastern part.

The forest department sources said Ampan did not cause any damage to the natural forest resources including the Sundari trees and wild animals but destroyed its infrastructures and uprooted some trees planted by the forest department under its forestation programme.

Ten rain trees, 2 palm trees, 5 coconut trees, seven Jhau trees, 1 banyan tree and 1 Krishnachura tree have been damaged in the eastern part of the Sundarbans due to the cyclone, he said.

Besides, 1,124 cubic feet of Sundori trees seized at different times have been washed away by tidal surge.

The DFO said four separate committees were formed to assess the damages caused by the cyclone.

According to the report of the committee, the cyclone damaged infrastructures worth Tk 1.60 crore while trees worth 7.61 lakh.

Cyclone ‘Amphan’ left a trail of devastation when it hit Bangladesh’s coastal districts with wind speed of up to 180kph and over 10 feet tidal surges on Wednesday night.

It killed 10 people and inflicted heavy damage to lives, livelihood, agriculture, infrastructures, environment, as well as the largest mangrove forest in the world, the Sundarbans, in southwestern region of the country.

An initial estimate suggested that the damage caused by the cyclone runs into hundreds of crores of taka. It is feared that the cyclone could threaten Bangladesh’s fight against coronavirus and create climate refugees.