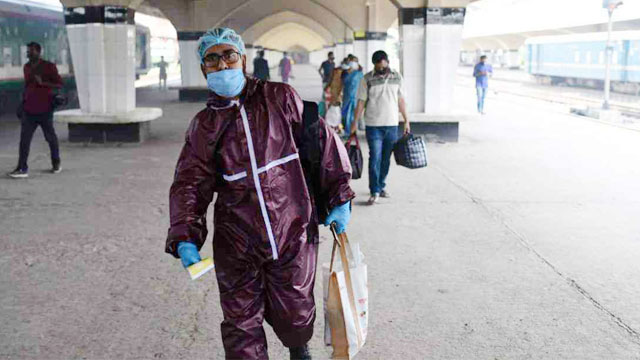 All government, semi-government , autonomous and private offices resumed on Sunday ending a 66-day general holiday amid spike in coronavirus cases and deaths across the country.

Public transport on river, road and rail routes across the country resumed their services on the same when the country saw the highest Covid-19 deaths and infections.

On the very first day of resuming transport services and offices, Bangladesh recorded the highest 2,545 new coronavirus cases and 40 deaths.

The government allowed limited operation of public transport and offices from May 31-June 15 as it earlier decided not to extend the general holidays for coronavirus anymore.

However, the authorities directed all concerned to maintain strict health guidelines while operating public transports and attending offices.

On the first day of opening of offices in the capital, the dwellers of the mega city have started seeing its common picture with huge traffic jam, people on roads and everywhere.

The officials and employees of the Bangladesh Secretariat joined the works, but visitors were not allowed there on the first day.

Many ministers carried out their official activities going to their respective ministry offices.

“No visitor was allowed to the Secretariat Today. Only staff were allowed,” Rajib Das, a police officer deployed at Bangladesh Secretariat, told UNB.

Even though people were permitted to travel, they were asked to maintain minimum 3 feet distance.

Road, Transport and Bridges Minister Obaidul Quader on Sunday said that buses, and other vehicles will have to keep 50 percent seats vacant.

He directed bus owners, labour organisations and other stakeholders to form terminal-based monitoring teams and arrange counseling for drivers and helpers to prevent the spread of the deadly virus.