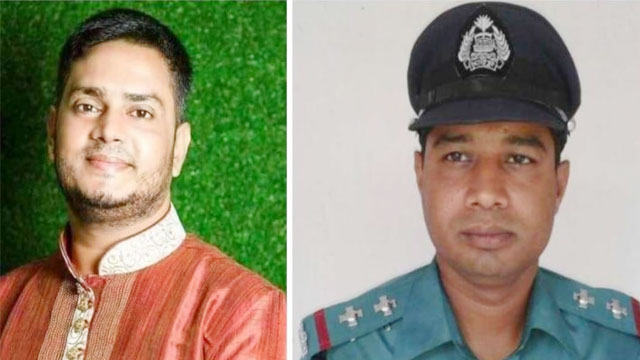 A youth has beaten up an on-duty traffic sergeant for asking him to wear a face mask, threatening him further with a pistol.

The incident occurred at Kalshi Main Road in Pallabi around 11:30am on Sunday.

Police and locals claimed that the man is Jewel Rana, general secretary of the Pallabi unit of Bangladesh Awami Jubo League, the youth front of the ruling party, in Dhaka.

Following the incident, the aggrieved sergeant filed a case of attempted murder against Jewel Rana and his associates with Pallabi police station.

He said that the sergeant, Md Al Farhad Mollah, filed a case of attempted murder against Rana and another 30 to 40 unknown individuals on Sunday night.

However, no arrests were made over the incident till 9am on Tuesday. The police are trying to arrest the accused, he said.

Citing the case, the official said that the sergeant Farhad, working in DMP's Pallabi traffic zone, was on duty at Kalshi Main Road in Pallabi around 11:30am on Sunday, when a minibus broke down, causing traffic jam on the road.

Another nearby bus was asked to help push the minibus to the side of the road.

Amid the chaos, the sergeant spotted Rana abusing the driver of the minibus, seemingly blaming him for the breakdown.

When the sergeant attempted to stop him and asked him to move to the side of the road so that the bus could be moved safely, Rana ignored him.

Traffic Sergeant Farhad then asked Rana to put on a face mask as he was not wearing one in public. This enraged Rana, who then started to insult and assault the sergeant, even going as far as to threaten him with a pistol that he was carrying with him.

After nearby pedestrians and police constables broke up the assault, the sergeant immediately called for help from Pallabi police station through the radio, said SI Tapas.

A few minutes later, Rana, with 30 to 40 associates, went to the Kalshi police box and assaulted the sergeant again, snatching his body camera and tearing his uniform.

Rana and his associates fled when more policemen from Pallabi station arrived at the scene.

The injured Farhad Mollah was admitted to the Islamia Hospital.

When contacted, Jubo League Central Committee General Secretary Mainul Hossain Khan Nikhil said: “We have heard news of the incident and we have already instructed city leaders to investigate the matter. If he (Rana) is found guilty, we will take organizational action against him.”