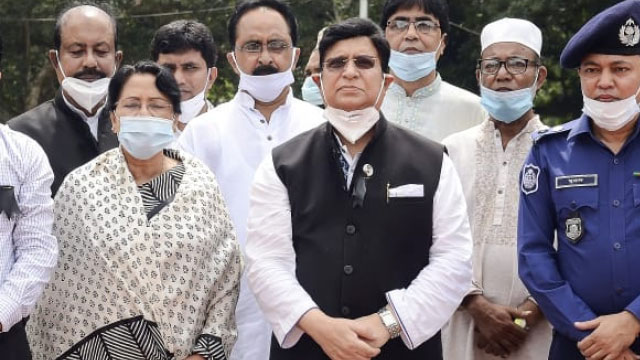 Foreign minister AK Abdul Momen on Saturday said Bangladesh's relations with India and China should not be compared. He also said Bangladesh emphasises on its development through cooperation and collaboration.

"Bangladesh's relations with India is rock-solid and historic while Bangladesh has economic ties with China. We must not compare," he said emphasising on joint efforts.

Momen made the remarks after visiting Mujibnagar Mukhtijuddha Memorial Complex where he paid tributes placing wreath.

Foreign minister's wife Selina Momen, among others, was present.

The minister does not want to bring anything in Bangladesh's relations from the India-China relations, saying it has nothing to do with Bangladesh.

Bangladesh is focusing on its development, said Momen adding that both India and China are Bangladesh's big trading partners and Bangladesh wants more trade benefits from India.

"There are some issues. We will resolve those. Keep faith on us," he said.

He said a Chinese company is developing a relationship with the icddr,b which is an institution of 28 countries.

"We have nothing to do with it. Some are trying to make it a political issue. This is purely a research," he said. The government will think of it, he added.

The foreign minister also suggested the newsmen to talk to the health ministry for details in this regard.

He said the government has contributed to the European Union so that Bangladesh gets vaccine smoothly.

Momen said vaccine should be distributed in an indiscriminate way and prime minister Sheikh Hasina said it needs to make sure that no one is left behind.