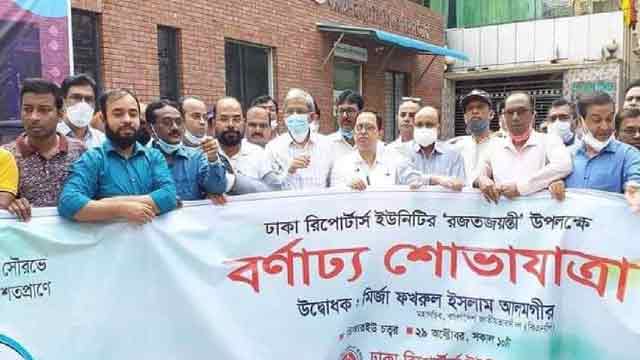 BNP secretary general Mirza Fakhrul Islam Alamgir on Thursday alleged that the media outlets in Bangladesh are being controlled by various laws, hampering the freedom of press.

“Unfortunately, media workers are under pressure now around the world. We’re noticing this pressure in Bangladesh is much greater as many journalists have been killed and persecuted only for political reasons. They’ve been sent to jail on many occasions while media outlets have been shut,” he said.

The BNP leader said, “Media outlets are being controlled to control democracy by making various laws that aren’t conducive to ensuring media freedom. We’re observing with sadness that the freedom of press, freedom of expression and tolerance towards dissents have gradually been eliminated in Bangladesh.”

Fakhrul made the remarks while inaugurating a rally of Dhaka Reporters' Unity (DRU) marking its silver jubilee.

He said their party believes that the media can play the biggest role in democracy and overall socio-economic development of the country. "The more freedom of press will be stronger and independent in a country, the more democracy will be stronger there,” he said.

The BNP leader said it is shameful for the nation that 10 US senators wrote to the Trump administration to impose targeted sanctions on "senior commanders" of Bangladesh's Rab for killing more than 400 people extrajudicially.

He said it is not good for Bangladesh that its such issues are now getting the focus of the global community only because of the current political situation in the country.

Fakhrul greeted the DRU members on the occasion of its silver jubilee and hailed the responsible role of the journalists as the frontline worriers in the fight against coronavirus. “Many journalists also embraced death due to coronavirus. I pay respect to them and pray for the salvation of their departed souls.

He appreciated the DRU for staying united for 25 years as an exceptional organisation of journalists by remaining out of the political divide. "The way the Dhaka Reporters' Unity has been carrying out their work has undoubtedly shown a glimmer of hope for us. I hope that DRU’s such character will remain intact and you’ll move forward to truly serve democracy and people. “That should be your vow today.”