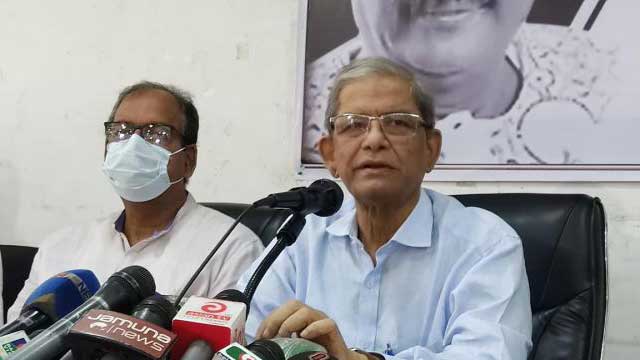 "Whose interests are they (govt) now protecting? The prices of essential commodities have skyrocketed. The price of each item has tripled or quadrupled...they've formed a syndicate which is looting all the profits," he said.

Fakhrul came up with the remarks while speaking at a discussion at the National Press Club arranged by Tariqul Islam Smriti Sangsad, marking the second death anniversary of former minister and BNP standing committee member Tariqul Islam.

The BNP leader said, "The salaries of the government officials have been raised by three to four times. Have the incomes of our farmers, labourers and small traders increased? They've, in fact, become almost paupers during this corona period. There're now many people who can't eat two square meals a day. You (govt) have now created that situation. You're pushing the country towards darkness by taking people hostage."

Fakhrul said the government is giving people a false impression about the country's GDP growth resorting to lies. "Go to neutral economists and they'll tell you the facts. Go to a farmer, rickshaw-puller, and labourer, and ask how they are leading their lives!"

He alleged that ruling party men made their fortunes by indulging in plundering and corruption. "You've siphoned off thousands of crores taka abroad. A driver of the health directorate made around Tk 800 crore. It's unimaginable that this is the condition of Bangladesh for which we fought."
Advertisement

Stating that there is no alternative to national unity in overcoming this situation, the BNP secretary general urged people and all political parties to get united and intensify the movement for the 'restoration' of democracy and ensure the fall of Awami League government.

Fakhrul slammed his ruling party counterpart Obaidul Quader for questioning the existence of BNP. "They don't see the existence of BNP and they say BNP is in crisis. Then why do you talk about BNP all the time? Because you know that BNP is the only party that can bring democracy back, change the situation and it can put an end to the anarchy you've created."

The BNP leader said no BNP leaders and activists joined Awami League leaving BNP though its chairperson Khaleda Zia was sent to jail, one lakh cases were filed against 3.5 million party followers and repressive acts like killing and enforced disappearance unleashed against them.

Fakhrul recalled the outstanding contributions of Tariqul Islam to the country and BNP.

BNP standing committee member Gayeshwar Chandra Roy said Tariqul Islam had involvement with progressive democratic politics since he was a teenager. "He's a believer in secular politics from the very beginning. That's why he's a very important and trusted political figure among the people of all walks of life."

On 4 November 2018, Tariqul died at Apollo Hospital in the capital at the age of 73. The second death anniversary of the BNP leader was observed on Wednesday amid various programmes.