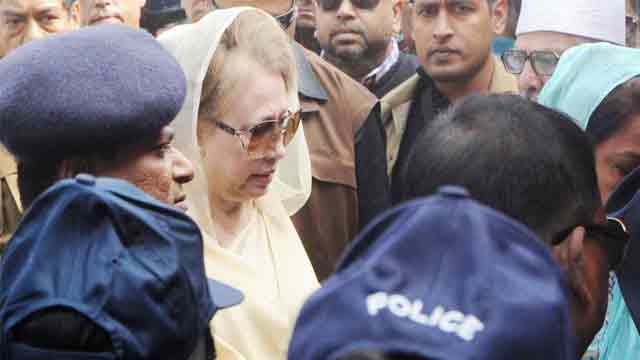 Speaking at a press conference at the party's Nayapaltan central office, he also said a strong wind of mass upsurge has started blowing in the country to dislodge the current 'illegal' government.

"It won't be possible to keep Khaleda Zia out of the election, no matter how many evil designs the government crafts. An election without her participation won't be acceptable both at home and abroad. People also won't let it happen," the BNP leader said.

Rizvi said it has now become clear to people that the government has sent their party chairperson to jail in a 'false political' case with a motive to leave her out of the election.

"The government can't suppress the nationalist forces with false and conspiratorial cases against BNP chairperson. People have already taken to the streets braving all the obstacles protesting Khaleda Zia's jailing, shaking the government's foundation. That's why top ministers are making unguarded remarks," he observed.

He also alleged that the government is resorting to various plots ahead of the next general election sensing its massive debacle in it.

The BNP leader said everything, including the law, trial and court, is now under the 'shadow' of Prime Minister Sheikh Hasina for lack of democracy in the country.

He said the government has been implicating the leaders and followers of opposition parties in 'false' cases to suppress its opponents.

Rizvi criticised the government for what he said its failure to check repeated incidents of question paper leakage.

He alleged that the Prime Minister's comment over the question paper leakage defending the Education Minister will only encourage those who involved in such malpractice.